The TRIN (also called the ARMS index) is a breadth indicator created by Richard W. Arms.  It acts as an oscillator and extreme values can be used to identify overbought and oversold conditions.  Unfortunately, the standard TRIN indicator has some unusual and undesirable characteristics, which makes it difficult to use in practice. This article introduces a modified version of the TRIN indicator, provides a graphical example, and includes AmiBroker code for the new indicator.

The resulting indicator moves in the opposite direction as the market, which is counter-intuitive.  The TRIN decreases on large up days and increases on large down days.

The TRIN indicator is centered on 1.0, but the indicator values are asymmetric.  A bearish value of 2.0 corresponds to a bullish reading of 0.5; a bearish reading of 4.0 corresponds to a bullish value of 0.25.  A TRIN value of 1.0 is neutral, but bearish deviations from 1.0 are much larger than comparable bullish deviations. Due to the asymmetry, moving averages of the TRIN are biased and therefore unusable.

Fortunately, it is relatively easy to both change the directional behavior of the TRIN and make it symmetric.  To do this, I created a new version of the TRIN indicator using three conditional formulas:

The new SymTRIN indicator is centered on zero and is continuous, unbiased, and symmetric, which allows us to calculate moving averages of SymTRIN.    In addition, it moves with the market, rising in an up move and falling in a down move.  A value of 1.0 would mean the bullish volume was 100% greater than the bearish volume.  A reading of -2.0 would mean the bearish volume was 200% greater than the bullish volume.

Extreme values of SymTRIN could be used to identify overbought and oversold conditions, setting up potential reversal trades.  For example, using a threshold of 1.0 or 100%, the market would be overbought when SymTRIN exceeded 1.0 and oversold when SymTRIN fell below -1.0.

However, these reversal trades would require trading against the prevailing trend, which is usually ill-advised.  As a result, instead of taking every SymTRIN reversal signal, it might be prudent to use filters to identify higher probability SymTRIN signals, which should reduce risk and improve returns.  I have not back-tested these filters, but here are a few possible suggestions.

The filter conditions attempt to identify situations when the SymTRIN has been extreme for an extended period (#3) but has already begun to reverse (#2) AND the daily value of SymTRIN is also extreme (#1), symbolizing one last unsustainable push by the bulls or the bears before the market reverses.  For the actual formulas used in the example below, please see the AmiBroker code at the end of the article.

The top panel in Figure 1 below is a daily candlestick chart of the Russell 2000 Index (RUT) in June of 2011.  The top panel also contains monthly pivot support and resistance lines.  The resistance lines are depicted in green and the support lines are illustrated in red.  The monthly central pivot is shown in dark yellow.

There are several cases of extreme daily SymTRIN values, but only one instance that met all of the filter criteria, which is noted by the green oval and green bullish reversal arrow below.  As you can see from the chart, the lagged long-term moving average (blue line) was below the dashed line, indicating that SymTRIN had been negative or bearish for an extended period.  The daily SymTRIN value was also below its extreme threshold, but the long-term SymTRIN moving average was rising, suggesting the bearish move was running out of steam.

On the same day, the RUT index closed below the second or lower monthly pivot resistance line.  I did not require this as a formal condition, but it certainly improved the probability of success for this reversal transaction.   Monthly pivots, especially MR2 and MS2, frequently act as powerful areas of support and resistance. 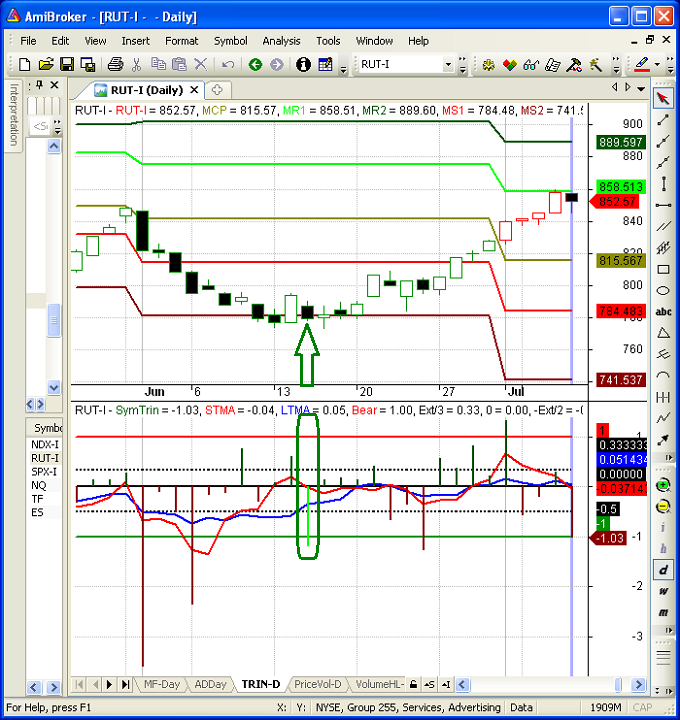 As I mentioned earlier, there are several other instances of extreme SymTRIN readings on the chart.  In early June of 2011, there was a very bearish daily SymTRIN value (-3.61).  However, this occurrence did not meet our filter criteria.  Specifically, the long-term moving average (blue line) was still declining and the lagged moving average was not below the extreme moving average threshold (lower black dotted line). 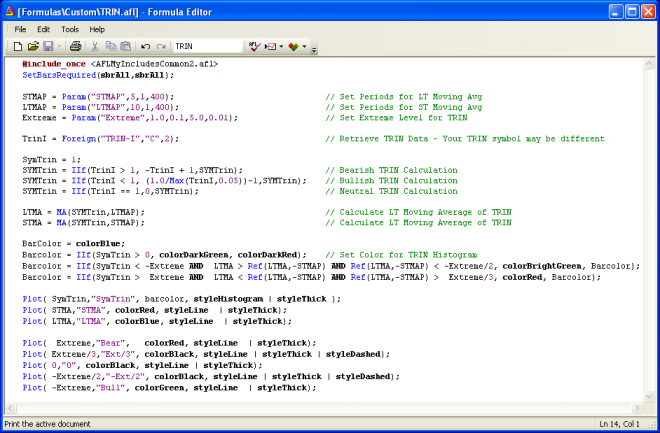 As always, the above post and code sample were provided for educational purposes only and should not be construed as investment advice or used for trading purposes.  I have not back-tested the above code and do not make any representations regarding its performance.

For reversal trades, I prefer to use option strategies that have positive income (theta) and have a high probability of profit.  For bullish reversals, selling bull put (credit) spreads work well.  For bearish reversals, bearish calendar or bearish diagonal spreads can be effective.

These types of contra-trend reversal signals are short-term in nature and often lead to brief periods of consolidation, instead of actual reversals.  That is the primary reason that I prefer to use option strategies instead of trading the underlying index or ETF.  Properly constructed directional option strategies will be profitable even if the market remains unchanged or moves slightly against you.

I have been an investment professional for over 30 years. I worked as a fixed income portfolio manager, personally managing over $13 billion in assets for institutional clients. I was also the President of a financial consulting and software development firm, developing artificial intelligence based forecasting and risk management systems for institutional investment managers. I am now a full-time proprietary trader in options, futures, stocks, and ETFs using both algorithmic and discretionary trading strategies. In addition to my professional investment experience, I designed and taught courses in financial derivatives for both MBA and undergraduate business programs on a part-time basis for a number of years. I have also written four books on options and derivative strategies.
View all posts by Brian Johnson →
This entry was posted in AmiBroker Code, Market Breadth, Market Timing, Technical Analysis and tagged AmiBroker, AMIBroker Code, AMIBroker SymTRIN indicator, ARMS Index, market breadth, monthly pivot, resistance, reversal strategy, support, symmetric TRIN indicator, SymTRIN indicator, trade, trader, TRIN. Bookmark the permalink.