I introduced a simple non-farm payroll forecasting model last month.  Since then, I have revised the model, which improved the fit and reduced the standard error.  This article explains the current forecast for the October non-farm payroll data, which will be released tomorrow morning.

The model forecasts are in the third data row of the table (in black).  Note that past and current forecasts reflect the latest values of the independent variables, but both forecasts will change when revisions are made to the historical economic data.

However, there is one important caveat this month. One of the model's independent or explanatory variables is weekly unemployment claims.  A few weeks ago, the weekly claims number was unusually low.  Several analysts have suggested that California might have significantly under-reported its claims that week.  If we adjust the claims number for that week to be consistent with the claims reported during the adjacent weeks, the model forecast for the month of October would drop from 140,000 to 121,000, which would be slightly below the consensus estimate.

The initial model that I created last month understated the NFP numbers for an extended period, but the new model is much more consistent with the historical data (see Figure 2 below).  However, positive and negative deviations from the new model NFP forecasts can still continue for several months, which has led to periods of positive and negative equity returns, respectively (at least anecdotally). In other words, when the new model consistently underestimates the actual NFP data by a significant amount, it can lead to strong equity market performance in the future.  The opposite is also true. 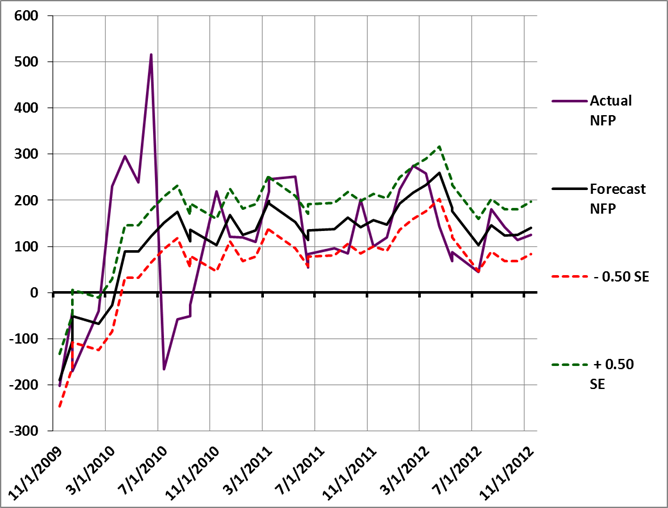 Using basic forecasting tools can help you identify unusual consensus economic estimates, which often lead to substantial surprises and market movements.  Identifying such environments may help you protect your portfolio from these corrections and help you determine the optimal entry and exit points for your strategies.  In addition, significant deviations from the new model's forecasts may foretell subsequent moves in the equity markets and the economy.

I have been an investment professional for over 30 years. I worked as a fixed income portfolio manager, personally managing over $13 billion in assets for institutional clients. I was also the President of a financial consulting and software development firm, developing artificial intelligence based forecasting and risk management systems for institutional investment managers. I am now a full-time proprietary trader in options, futures, stocks, and ETFs using both algorithmic and discretionary trading strategies. In addition to my professional investment experience, I designed and taught courses in financial derivatives for both MBA and undergraduate business programs on a part-time basis for a number of years. I have also written four books on options and derivative strategies.
View all posts by Brian Johnson →
This entry was posted in Economic Indicators, Market Commentary, Market Timing and tagged monthly emplyoment report, non-farm payroll, non-farm payroll forecast. Bookmark the permalink.