In a recent post titled "ECRI Betrayed by Their Own Index," I noted the apparent inconsistency between the Economic Cycle Research Institute's (ECRI) current recession call and the recent strength of ECRI's proprietary weekly leading indicators series.

In response to that post, James Picerno, the editor of Capital Spectator, shared some of his thoughts on recession forecasting and provided links to articles on the Capital Spectator Economic Trend Index (CS-ETI) and the use of probit models to estimate the probability of a recession.  I was intrigued by his research and by the accuracy of his models.   He opened my eyes to the benefits of forecasting recessions.

I am no stranger to quantitative models.  However, I have focused all of my attention on the development of systematic trading strategies which identified anomalies in asset prices, but completely ignored the economy.  My custom indicators and models have been successful, but I am now convinced that ignoring the incremental benefits of economic cycle modeling represents a major opportunity cost.  I have tracked various economic indicators anecdotally through the use of a summary market indicator score, but never constructed a formal model to identify recessionary environments. 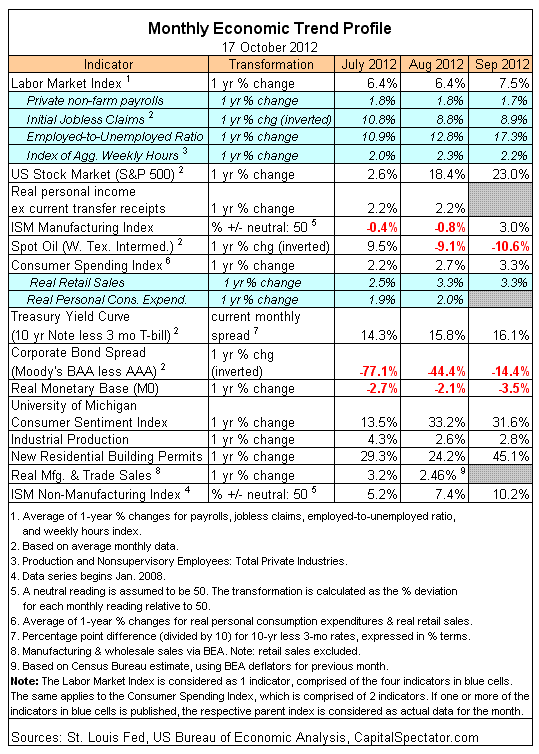 This is a simple, intuitive framework, but one that does not automatically convert index values to recession risk.  Picerno explains a possible rule-of-thumb for interpreting the CS-ETI index values,

"History implies that we should think of recession risk as threatening when CS-ETI falls under the 60% mark, which means that less than 60% of the underlying indicators are trending positive. A reading under 50% is an even stronger warning and effectively the point of no return."

With those criteria in mind, take a look at the historical CS-ETI values in Figure 2 below.  Notice how effective the 60% and 50% thresholds were in identifying recessions (the shaded regions).  Even using the more conservative 60% value, there were no false signals for the period 1968 to present.  In all cases, the CS-ETI provided advance warning of an imminent recession.  The recessionary periods were defined by the National Bureau of Economic Research (NBER), but not until well after the fact. 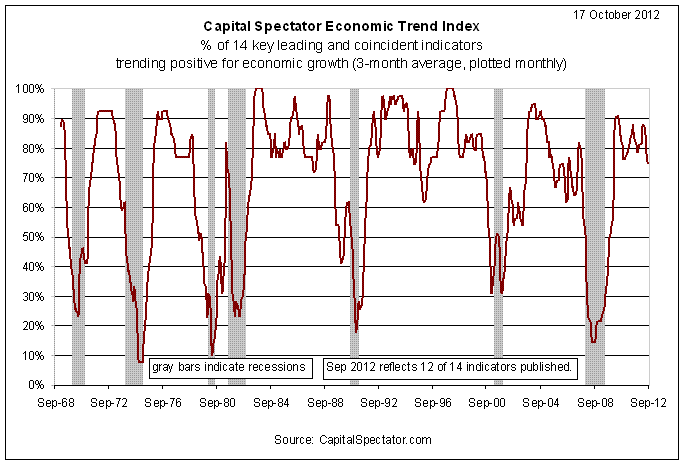 While the above results are impressive, it would still be helpful to convert the CS-ETI values into actual recession probability estimates, thus the need for the probit model.  Picerno explains his process:

"I'm using a standard probit model that uses the monthly data for the 3-month average of CS-ETI as the independent variable and NBER's monthly recession readings (0=no recession, 1=recession). I estimate the cumulative normal distribution of the alpha and beta coefficients via a maximum likelihood technique in both Excel and R. It's all relatively conventional statistics."

The probit model converts the CS-ETI diffusion index values into more intuitive recession probability estimates (Figure 3 below) ranging from 0% to 100%.   Again, the model results are impressive and are now more intuitive as well.  It is interesting to note that (according to the model) the current recession risk is negligible. 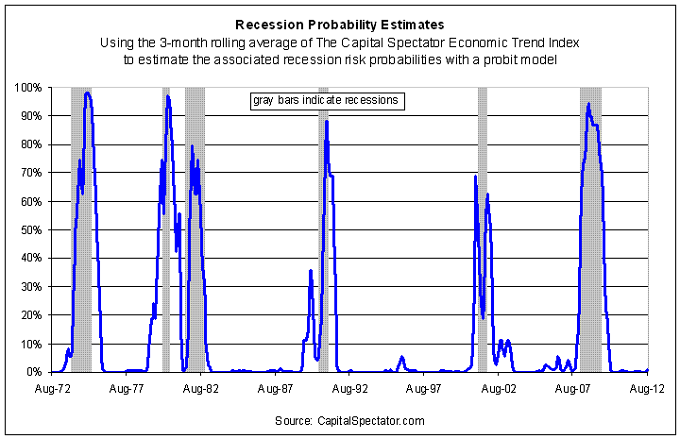 How can such a simple model deliver such astounding results? Because it is easier to identify recessions than it is to forecast asset prices.  The NBER defines a recession as "a significant decline in economic activity spread across the economy, lasting more than a few months, normally visible in real GDP, real income, employment, industrial production, and wholesale-retail sales."  The guidelines are straightforward and the NBER even tells us which variables are important.

In addition, unlike asset prices, there is no noise in the dependent variable when forecasting recessions; the economy was either in a recession (1) or not (0).  Equity prices are highly volatile, with a never-ending sequence of rallies and pull-backs, which makes them very difficult to model.

Picerno was generous enough to share his variables, variable transformations, and his methodology.  He also provides the historical CS-ETI and probit graphs on his website.  In addition, he posts regular updates of the CS-ETI and plans to communicate significant change in the probit model probability estimates going forward.  This is valuable information.

However, Picerno's work could also be used as a starting point for additional research.  We all have our favorite economic indicators and many data series are available for free on the Internet, especially those provided by Government agencies.

Once you have the data, calculating a diffusion index is simple.  However, when it came to the probit model, I was initially skeptical of Picerno's assertion that "It's all relatively conventional statistics."  Fortunately, after a little reading on probit models, I was able to create a simple functional example in Excel.

I plan to follow the CS-ETI going forward and James graciously authorized me to provide periodic CS-ETI updates on Trader Edge.  Nevertheless, I am intrigued by the power of these tools and would also like to experiment with a number of different variable combinations. The most time-consuming task would be collecting the data.  Testing various combinations, transformations, and probit models would take very little time.

There is another important reason that I am considering developing my own recession model or models: I would like to have access to the historical diffusion index and probit probability estimates.  I would like to test this data with my existing models, which are based primarily on technical data.  The integration of proven economic and technical models could create even more profitable and robust trading strategies.

I have been an investment professional for over 30 years. I worked as a fixed income portfolio manager, personally managing over $13 billion in assets for institutional clients. I was also the President of a financial consulting and software development firm, developing artificial intelligence based forecasting and risk management systems for institutional investment managers. I am now a full-time proprietary trader in options, futures, stocks, and ETFs using both algorithmic and discretionary trading strategies. In addition to my professional investment experience, I designed and taught courses in financial derivatives for both MBA and undergraduate business programs on a part-time basis for a number of years. I have also written four books on options and derivative strategies.
View all posts by Brian Johnson →
This entry was posted in Economic Indicators, Fundamental Analysis, Market Commentary, Market Timing, Recession Forecasting Model, Strategy Development and tagged Capital Spectator, diffusion index, economic cycle, market cycle, probit model, recession, recession forecasting, recession modeling, systematic strategy, trader, trading. Bookmark the permalink.

5 Responses to Forecasting Recessions is Easier than Modeling Asset Prices