Single instances of divergences are relatively easy to identify visually on a chart, but much more difficult to detect using computer algorithms.  As a rule, I only trade strategies that have been proven to generate attractive risk-adjusted returns historically AND have some underlying foundation for those excess returns. I have been thinking about divergence indicators and strategies for years, but had never been able to identify a promising divergence algorithm.

After completing my new book, Option Strategy Risk / Return Ratios, I returned  my attention to divergences.  I devoted the past month to creating a standardized divergence metric that can be applied to any predictive indicator and used that new tool to develop two new trading strategies, one based on daily data and one derived from weekly data. This article will provide an overview of the framework for the divergence algorithm and will also provide several graphical examples using actual market data.

When I began my divergence strategy research, I started with three premises:

I used these three premises as the foundation for the construction of the divergence indicator and the divergence trading strategies. To address the first premise, I did not just look at the most recent periods when identifying divergent highs and lows, I looked at multiple periods and compared the highs and lows for each period.  I then created an standardized divergence metric that aggregated the divergences across a predetermined number of prior periods, assigning more weight to divergences that had persisted for longer periods of time.  Positive numbers were used to signify bullish divergences and negative numbers were used to represent bearish divergences.

The divergence indicator aggregates the standardized divergence scores for eight different sub-indicators, which are derived from price, volume, volatility, sentiment, market breadth, relative strength, or some combination thereof. I should also mention that I wrote two separate divergence functions, one for indicators that normally move in the same direction as price and a second function for indicators that typically have an inverse relationship with price. With both functions available, it is possible for me to apply the same divergence algorithm to any sub-indicator and aggregate the results into a single standardized divergence value.

Each one of the sub-indicators measures a different aspect of the market and divergences in every one of the sub-indicators is significantly predictive individually.  However, when multiple indicators diverge simultaneously from price over multiple periods, the resulting divergences are highly predictive.  When used to trade in the same direction as the prevailing intermediate-term trend, the resulting daily and weekly strategies generate very high probability trades.

The top panel in Figure 1 below is a daily candlestick chart of the Russell 2000 Index (RUT) from late January 2014 through May 14, 2014. The purple line is an intermediate-term moving average of the closing prices of RUT.  The green shaded region in February of 2014 highlights a recent trade from the daily divergence strategy.  I plan to use the corresponding futures contract to execute all equity index transactions.

Finally, the purple line in the bottom panel represents the average divergence level, which is calculated using divergence measures for all eight sub-indicators.  Note, the purple line uses a different scale than the histogram bars.  Not only does the number of large divergences need to equal or exceed the minimum threshold value, but the average divergence must also remain positive during all bullish trades and remain negative during all bearish trades.  Finally, the closing price must be above the moving average to signal a bullish trade and below the moving average to signal a bearish trade. 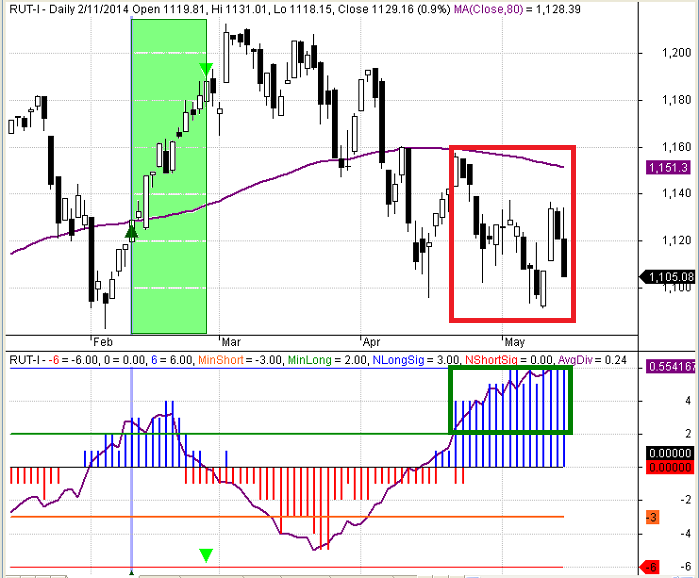 The recent data in RUT is interesting (see Figure 1 above).  The number of sub-indicators showing a large bullish divergence has varied between five and six for the last week of daily data, which clearly exceeds the minimum threshold of two (green box above).  The average level of divergence over all eight sub-indicators is also positive and very significant.  However, the daily divergence strategy has NOT yet signaled a bullish trade.  The reason is that the the price of RUT has remained below the intermediate-term moving average (red box above).  The daily divergence strategy will not signal a trade until both bullish conditions are met.

Figure 2 below is a daily divergence chart of the S&P 500 Index (SPX).  The format and time period are the same as in Figure 1 above. Note, the daily strategy signaled a February 2014 bullish trade in SPX, which corresponded almost exactly to the timing of the bullish signal in RUT.  However, the recent picture is quite different. 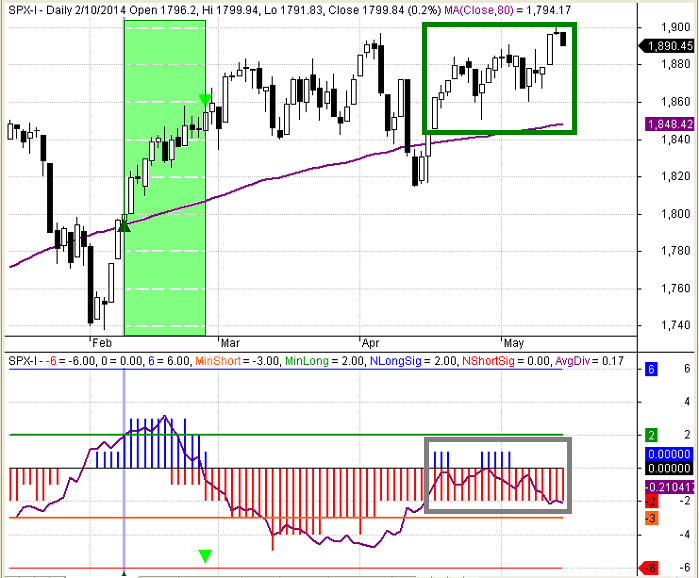 The second bullish trade signal occurred in early April of 2009 and lasted five weeks.  Both trades were profitable.  Negative divergences did occur prior to the dramatic price drop in late-2008, but the divergences were not significant enough to generate a high-probability trade signal.  Due to the normal bullish bias in equity markets, the criteria for entering bearish trades are more restrictive than the criteria for entering bullish trades. 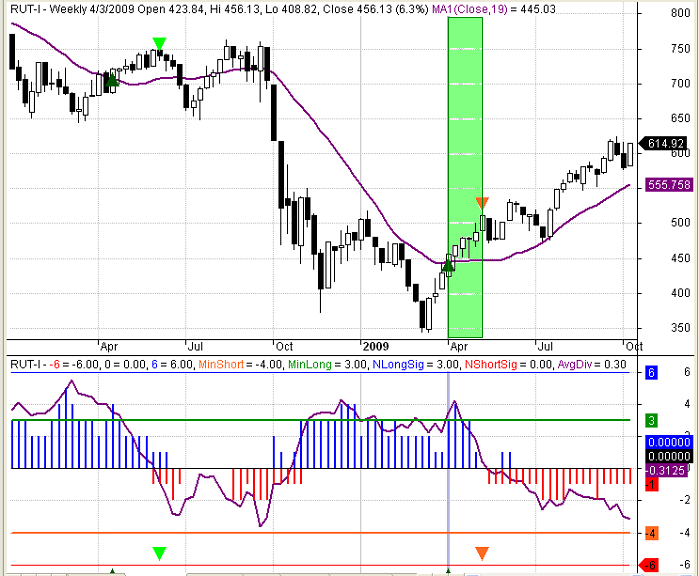 The daily and weekly divergence strategies both generate a high percentage of profitable trades, 77% and 82% respectively.  In addition, the size of the average winning trade for both strategies exceeds the size of the average losing trade.  The resulting profit factors and Sharpe Ratios are very attractive.  Due to their restrictive criteria, neither of the two strategies generates a large number of trades.  However, the trade signals that do occur have historically had a very high probability of success, making these strategies easier to trade psychologically.

While some of the sub-indicators could be applied to any underlying security, many are specific to broad-market equity indices, notably breadth, sentiment, and relative strength.  As a result, the divergence indicator and resulting divergence strategies are only applicable to equity indices.  The divergence indicator uses only one look-back period parameter, so there is very little chance of over-fitting the data.  Both strategies use fixed-loss stops to ensure proper risk management and to facilitate position sizing.  I plan to use the new strategies to trade futures on SPX(ES), NDX(NQ), and RUT(TF).

I have been an investment professional for over 30 years. I worked as a fixed income portfolio manager, personally managing over $13 billion in assets for institutional clients. I was also the President of a financial consulting and software development firm, developing artificial intelligence based forecasting and risk management systems for institutional investment managers. I am now a full-time proprietary trader in options, futures, stocks, and ETFs using both algorithmic and discretionary trading strategies. In addition to my professional investment experience, I designed and taught courses in financial derivatives for both MBA and undergraduate business programs on a part-time basis for a number of years. I have also written four books on options and derivative strategies.
View all posts by Brian Johnson →
This entry was posted in Market Breadth, Market Sentiment, Market Timing, Relative Strength, Strategy Development, Technical Analysis and tagged Divergence Strategies, market breadth, relative strength, sentiment, technical analysis, trade, trader. Bookmark the permalink.