This article presents the Trader Edge aggregate neural network model forecast for the June 2016 non-farm payroll data, which is scheduled to be released tomorrow morning at 8:30 AM EDT.

This is particularly important, because a large upside surprise tomorrow could resurrect the possibility of a Fed rate hike, which the market had completely discounted after last month's NFP report and the volatility induced by Brexit. 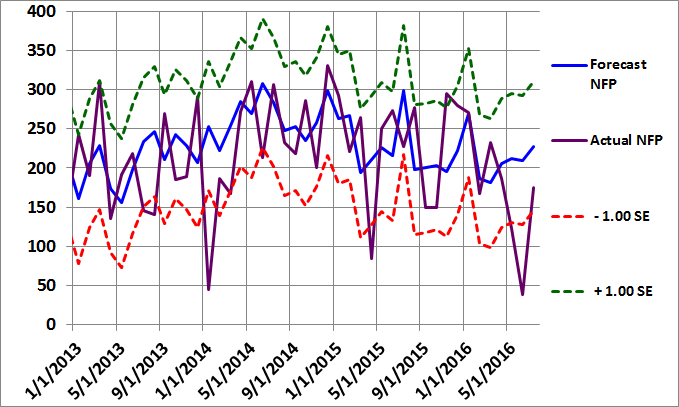 As you can see from the chart in Figure 3, the slope had been negative since early 2015, briefly leveled out, but is still declining. However, the most recent forecast is slightly above the 12-month moving average, but this is only one data point. Unfortunately, 16 of the previous 18 forecast observations were below the moving average line. The employment environment had clearly been weakening for some time, but there is the possibility that it is beginning to stabilize. 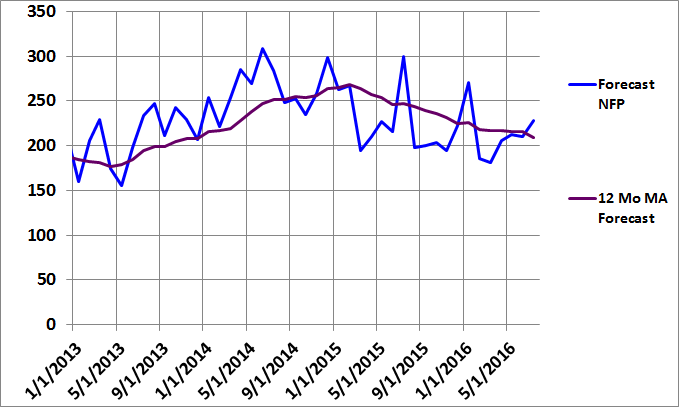 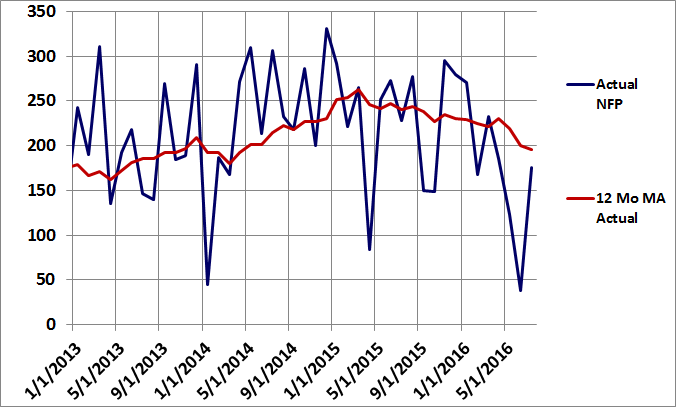 The model forecasts for May and June suggest there is an increased probability that the actual June NFP data will exceed the consensus estimate by a material amount tomorrow. This could resurrect the possibility of a Fed rate hike, which had been heavily discounted by the market due to recent events.

According to the latest CME Group FedWatch probability calculation, the implied probability of a Fed rate hike is effectively 0% in July and only 5.9% at the September or November meetings.

As a result, a large upside NFP surprise tomorrow could have significant implications for equity, bond, commodity, and currency markets.

I have been an investment professional for over 30 years. I worked as a fixed income portfolio manager, personally managing over $13 billion in assets for institutional clients. I was also the President of a financial consulting and software development firm, developing artificial intelligence based forecasting and risk management systems for institutional investment managers. I am now a full-time proprietary trader in options, futures, stocks, and ETFs using both algorithmic and discretionary trading strategies. In addition to my professional investment experience, I designed and taught courses in financial derivatives for both MBA and undergraduate business programs on a part-time basis for a number of years. I have also written four books on options and derivative strategies.
View all posts by Brian Johnson →
This entry was posted in Economic Indicators, Fundamental Analysis, Market Commentary, Market Timing, NFP Forecasting Model and tagged June 2016 NFP Forecast, monthly employment report, non-farm payroll, non-farm payroll forecast, trade, trader, Trader Edge. Bookmark the permalink.