Housing starts were the only bright spot in another dismal week of economic data in the U.S. The following post provides an overview of the major economic releases from this week as well as an update on market conditions, including bond yields in Italy and Spain.

Here is a partial list of the US economic reports from this week:

The source for the above economic data was www.Briefing.com.

Housing starts were stronger than expected this week and were also up from last month.  However, that strength did not translate to building permits, which were weaker than expected and down materially from the prior month.  Existing home sales surprised the market on Thursday morning, coming in much weaker than expected.  As discussed in earlier posts, while the housing statistics have improved modestly, the overall numbers are still down 70% from the pre-recession highs. In addition, according to estimates from Standard & Poor's Rating Services, it will take another 46 months to clear the existing shadow inventory of distressed properties.

As I discussed in my last post, this was the third consecutive monthly decline in retail sales, a streak not seen since the second half of 2008 - during the heart of the last recession. Given that retail spending is responsible for almost 70% of U.S. economic growth, this is especially troubling. CPI continues to be flat, walking the tightrope toward possible deflation.

Industrial production was consistent with expectations, but the Philadelphia Fed release of -12.9 was worse than expected.  In addition, it was the third consecutive value in negative territory, signalling a contraction for the manufacturing sector.  The previous ISM release also indicated a contraction.  Initial unemployment claims had declined recently, but that now appears to be a temporary anomaly in the data.  Unemployment claims were much worse than expected and up sharply from last week. 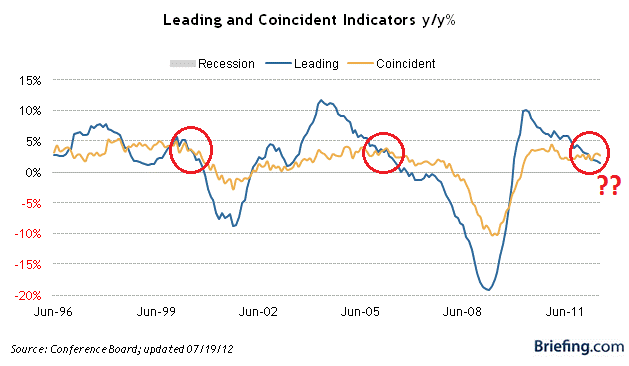 The second quarter earnings releases so far have been mixed.  While a number of companies are beating earnings estimates, many are failing to meet revenue expectations.  In other words, gains in earnings are due primarily to cost cutting measures that are not sustainable indefinitely.  As explained in my last post, earnings revisions are a better market forecasting tool than historical earnings data.  According to Steve Reitmeister at Zacks: 2.5 companies are seeing negative revisions for every 1 getting a positive revision. This is the worst reading since the Great Recession.

The news in Europe is not any better.  Borrowing costs for Italy and Spain initially declined amidst the euphoria surrounding the recent European summit.  Unfortunately, bond investors are now waking up to the fact that nothing structurally has changed in Europe.  10-year yields for Italy and Spain have now climbed back to 6.17% and 7.26%, respectively.  Italy's FTSE MIB index declined by 4.38% today.  Spain's IBEX 35 index was down a startling 5.82%.

The Economic Cycle Research Institute (ECRI) believes the U.S. is already in a recession.  Even if you are not yet convinced, there is serious cause for concern.  Despite the building evidence of global economic weakness, as of last night's close, the S&P 500 index was still trading near its post recession highs and implied volatility remained inexplicably low.  The US equity markets appear to be far too complacent

I have been an investment professional for over 30 years. I worked as a fixed income portfolio manager, personally managing over $13 billion in assets for institutional clients. I was also the President of a financial consulting and software development firm, developing artificial intelligence based forecasting and risk management systems for institutional investment managers. I am now a full-time proprietary trader in options, futures, stocks, and ETFs using both algorithmic and discretionary trading strategies. In addition to my professional investment experience, I designed and taught courses in financial derivatives for both MBA and undergraduate business programs on a part-time basis for a number of years. I have also written four books on options and derivative strategies.
View all posts by Brian Johnson →
This entry was posted in Economic Indicators, Market Commentary, Market Timing, Uncategorized and tagged CPI, deflation, economic data, economic indicators, European debt crisis, housing starts, leading indicators, market cycle, market timing, Retail sales. Bookmark the permalink.