I read about this indicator in an article titled "Roulette Wheels and Individual Stocks," which appeared in the December 2012 issue of Active Trader.  The article was written by Richard J. Bauer, Jr.  In the article, Bauer used an innovative approach to create a new type of market timing indicator based on the relative strength of an individual security versus a broad market index.  The indicator shows promise as a market timing oscillator.

Unlike most oscillators derived from a single price series, the RW indicator is a percentile ranking based on all possible paths of holding one of two securities over a given number of periods.  Bauer used five periods in his article and I will do the same.  I will use this framework to evaluate the continuous future contract for the Russell 2000 index (TF).  For comparison purposes, I will use the continuous futures contract for the S&P 500 index (ES) as a proxy for our broad market index.

In each period, the investor could either hold the security being evaluated (TF) or the broad market index used for comparison purposes (ES). One such possible path would be TF-ES-TF-ES-TF.  There are 32 unique return paths over a 5-day period (2^5). The return from holding TF for the entire 5-day period would be derived from the sequence TF-TF-TF-TF-TF.

Bauer provided the historical indicator data for the article in a color-coded table.  He termed the indicator the roulette wheel (RW) measure, based on the resemblance of the cells in the table to the numbered pockets on a roulette wheel.  While his indicator is interesting, Bauer's tabular format makes it very difficult to understand the relationship between the indicator values and the price of the security.

To gain insight into the behavior of the RW indicator, I used AmiBroker to code the indicator algorithm and display the results graphically, immediately below the price chart of the individual security.  This helped me understand how best to use the indicator in practice.

Figure 1 below contains three panes.  The top panel is a weekly candlestick chart of TF.  The monthly central pivot and two monthly pivot support (red) and resistance lines (green) are also included in this pane.  The blue line in the second panel represents the weekly RW levels.  The purple line is a 3-period moving average of the weekly RW line.  The pink dashed line is a 13-period moving average of the RW line.  Finally, the green and red horizontal lines represent extreme thresholds, which will be used to identify possible reversal or consolidation areas.

The blue line in the bottom pane is my custom COT indicator, which I have referenced in a number of past articles.  I use this for confirmation in many of my strategies, but the indicator is only useful when the COT indicator reaches extreme levels and there is independent confirmation of a trend reversal.  Again, the green and red lines represent extreme thresholds.

No indicator should be used in isolation and the RW oscillator is no exception.  Moving to the top panel, notice that the candlestick on 9/21/2012 is bumping up against the second or highest monthly resistance level (MR2).  This is a very powerful resistance level, which adds a second level of confirmation for the reversal trade.

Finally, the COT indicator in the bottom panel was below the extreme threshold on 9/21/2012.  The red histogram illustrates that the commercials were selling into the rally, which eventually made it impossible for the buyers to sustain the rally.   The result was a very high probability reversal, confirmed by three separate indicators: RW, monthly pivot resistance, and COT. 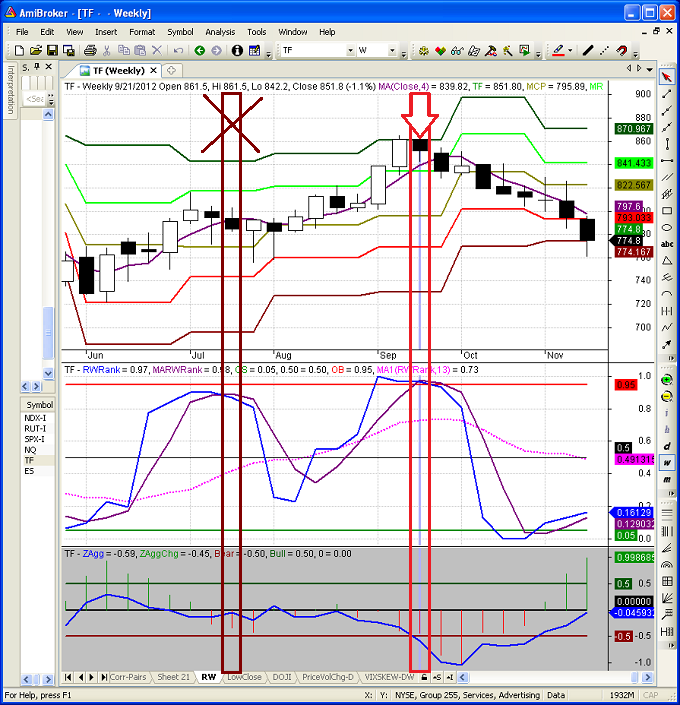 On the chart, I also highlighted an example of a marginal RW reversal signal on 7/21/2012 (dark red) that was not confirmed by the other indicators. Again, let's start with RW in the second pane.  As was the case before, RW had just crossed below the 3-period moving average, but both RW and the 3-period moving average were below the extreme threshold, resulting in a weak signal.  In addition, notice that the 13-period moving average (pink) was still climbing and had not even researched the neutral or 0.50 threshold.  The RW crossover occurred in the early stage of the rally, which would not normally suggest a high-probability reversal.

In the top chart pane, the TF price was still well below MR1 and MR2 on 7/21/2012, which suggested no immediate resistance.  The COT indicator in the bottom pane was approximately neutral, adding no support for the reversal trade.

Even though the RW oscillator shows promise, when other indicators fail to provide confirmation, reversal signals are less reliable and often lead to brief periods of consolidation - which is exactly what happened in this case.  TF drifted slightly lower for the next two weeks, and then continued its ascent over the following two months.

After publishing this article, a reader asked that I include the AMIBroker code for this indicator.  I did not initially include the code because the image was difficult to read due to the nested loops. Unfortunately, copying and pasting the actual code corrupts the code, so the code image is currently the only viable option.  I apologize if the code below is difficult to read.  As always, the sample code is provided for educational purposes only. 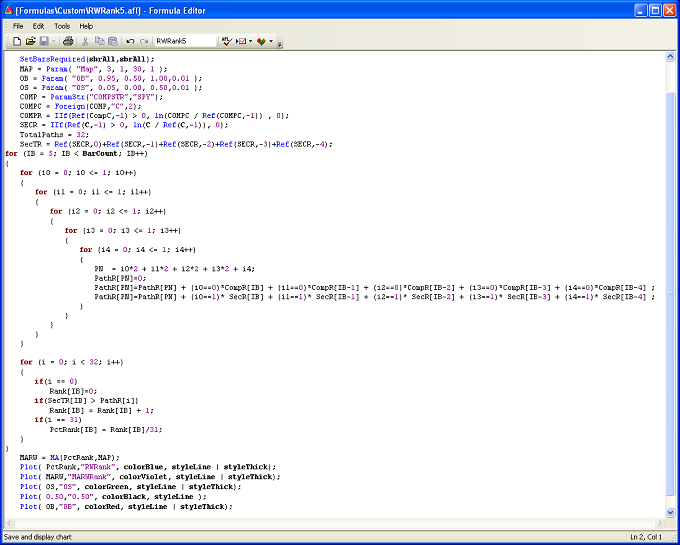 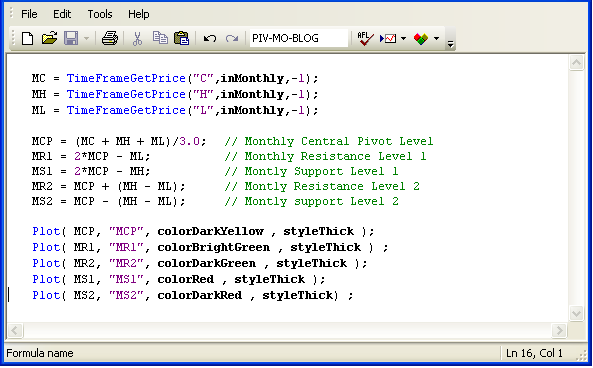 The RW algorithm requires a nested loop structure that is computationally intensive.  The time required to complete the algorithm increases exponentially with the number of periods.  In addition, it is not a trivial matter to handle a variable number of periods, which makes it more difficult to use in practice.  The sample code above uses a fixed number of periods.

Nevertheless, the RW oscillator is a promising reversal indicator with a very unique approach.  Short-term moving average crossovers can be used to enter trades, but only at extreme levels.  Longer-term moving average levels should also be used to confirm the optimal environment for short-term reversal signals.  RW signals should always be confirmed with other independent technical and/or fundamental tools and stops should always be used.

In addition to executing directional trades in the underlying security, it would also be worthwhile to consider high-probability OTM credit spreads for bullish reversals and diagonal or calendar spreads for bearish reversals.

I have been an investment professional for over 30 years. I worked as a fixed income portfolio manager, personally managing over $13 billion in assets for institutional clients. I was also the President of a financial consulting and software development firm, developing artificial intelligence based forecasting and risk management systems for institutional investment managers. I am now a full-time proprietary trader in options, futures, stocks, and ETFs using both algorithmic and discretionary trading strategies. In addition to my professional investment experience, I designed and taught courses in financial derivatives for both MBA and undergraduate business programs on a part-time basis for a number of years. I have also written four books on options and derivative strategies.
View all posts by Brian Johnson →
This entry was posted in AmiBroker Code, COT Analysis, Futures, Market Commentary, Market Timing, Relative Strength, Technical Analysis and tagged Active Trader, AmiBroker, COT, COT Indicator, market timing, monthly pivot, monthly pivot resistance, monthly pivot support, moving average, oscillator, reveral, reversal candidate, roulette wheel, RW indicator, technical analysis, trade, trader. Bookmark the permalink.