The following article introduces a new aggregate neural network model that was designed to forecast the seasonally-adjusted, annualized, real rate of change in U.S. GDP.

The Trader Edge aggregate GDP model represents the average of two neural network model forecasts.  Neural networks are extremely powerful and great care must be used to avoid over-fitting the data.  As a result, before constructing the models, I divided the data into three separate groups: training, cross-validation, and testing.  The training data was used to train the neural network models.  The cross-validation data was used (in conjunction with the training data) to identify the best variable combinations and the optimal number of processing elements. Finally, the testing data was used to ensure generalized solutions that were applicable to data outside the training data-set.

When constructing the two neural network GDP models, I started with the same data that I used to develop the recession models.  For the first model, I identified the optimal look-back period for each of the independent variables and discarded variables that had limited explanatory power.  I then estimated several neural network models with different architectures and retained the one with the best overall performance.

For the second neural network model, I started with the same data, but let the neural network model choose the best combination of independent variables using a greedy algorithm.  This is a time-consuming process that initially constructs neural network models for every variable, identifying the best variable, then uses that variable with all other individual variables to construct two variable models.  It then identifies the best pair of variables, then continues the process.  The algorithm terminates at the point when the estimation results for the training, cross-validation, and testing sets diverge - in other words, when the model begins to over-fit the training data.

While the GDP data is only released quarterly, I interpolated the actual GDP data to create monthly observations and monthly forecasts.  Each monthly forecast represents a rolling three-month GDP forecast, lagged by one month.  This is consistent the quarterly reporting lag; GDP is reported one month after the end of each calendar quarter.

While the interpolated monthly data is obviously not official, there is some logic to using a weighted-average of the quarterly GDP data to create monthly observations.  In addition, this approach tripled the amount of data, which was beneficial from a modeling perspective.  Finally, I plan to run the GDP model monthly to provide more timely insights into changes in GDP.

The Trader Edge aggregate GDP model performed well historically.  The standard error of the estimate was a respectable 0.74%.

The model forecasts from 2000 to 1/1/2013 are included in Figure 1 below (blue).  The purple line illustrates the actual quarterly GDP data.  Both lines use the left vertical axis.  The most recent "actual" GDP observation represents the briefing.com consensus GDP estimate of +1.0%.  The gray shaded regions represent past U.S. recessions as defined by the National Bureau of Economic Research (NBER). 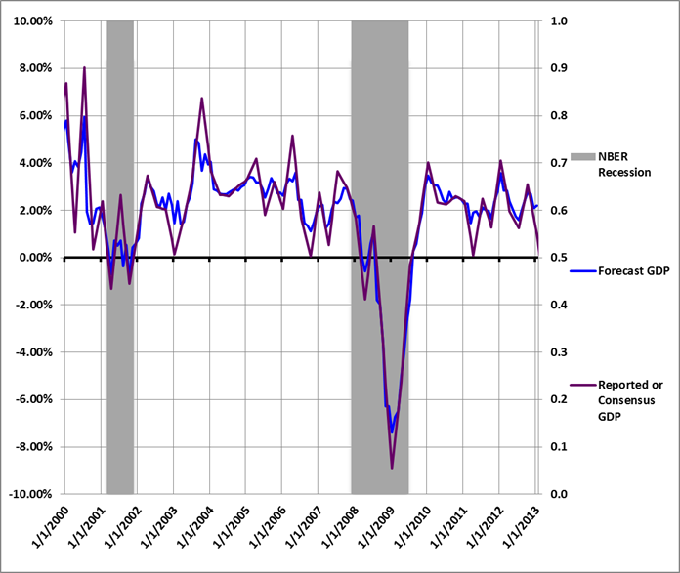 Since this article introduces the Trader Edge aggregate GDP model for the first time, I also wanted to provide a more comprehensive forecast history.  Please see Figure 2 below. 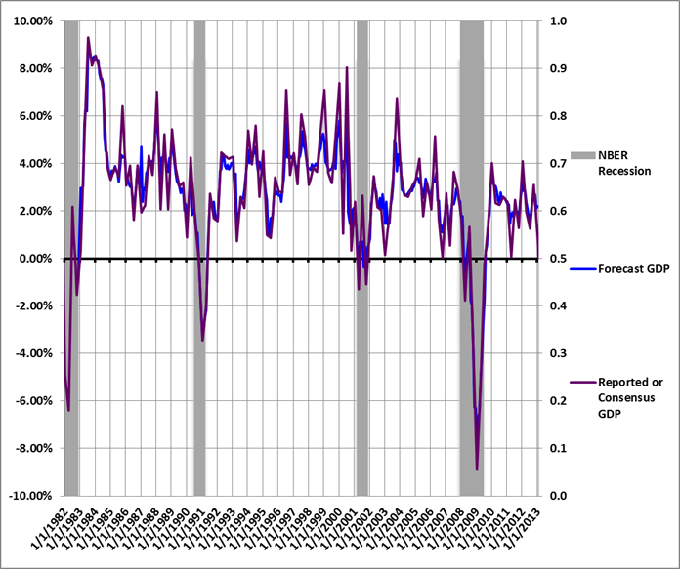 James Picerno, the editor of CapitalSpectator.com, also publishes a GDP model forecast.  His latest forecast for Q4 2012 is available here.  Figure 3 below is from the latest Capital Spectator forecast.  The Average Capital Spectator Econometric GDP Nowcast (Jan 25) was +2.0%.  This forecast is only slightly lower than the Trader Edge GDP forecast of +2.2%. 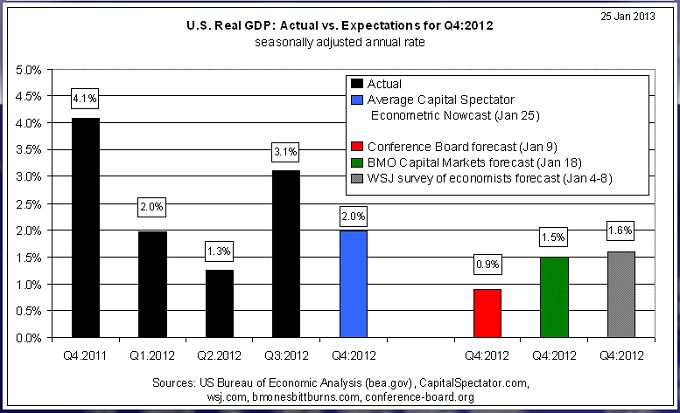 The Capital Spectator and Trader Edge Q4 2012 GDP estimates are significantly higher than the Conference Board, BMO, WSJ, and briefing.com forecasts.  If the above model forecasts are accurate, the GDP release on Wednesday morning could be a pleasant surprise for the market.

I have been an investment professional for over 30 years. I worked as a fixed income portfolio manager, personally managing over $13 billion in assets for institutional clients. I was also the President of a financial consulting and software development firm, developing artificial intelligence based forecasting and risk management systems for institutional investment managers. I am now a full-time proprietary trader in options, futures, stocks, and ETFs using both algorithmic and discretionary trading strategies. In addition to my professional investment experience, I designed and taught courses in financial derivatives for both MBA and undergraduate business programs on a part-time basis for a number of years. I have also written four books on options and derivative strategies.
View all posts by Brian Johnson →
This entry was posted in Fundamental Analysis, GDP Forecasting Model and tagged 2012 GDP forecast, Capital Spectator, GDP forecast, GDP forecasting, neural network, trader, Trader Edge aggregate GDP model. Bookmark the permalink.