In January, I introduced a new aggregate neural network model that I developed to forecast the seasonally-adjusted, annualized, real rate of change in U.S. GDP.  The GDP growth rate is only reported quarterly, but the model provides a rolling 3-month GDP growth rate forecast every month (with a one month lag).  As a result, the model generates more timely information about the growth of the U.S. economy.

The Trader Edge aggregate GDP model performed well historically.  The standard error of the estimate was a respectable 0.74%.  However, the forecast for the Q4 2012 GDP exceeded the reported GDP by over 2%.  This was very unusual, but so was the Q4 GDP report.

As explained in previous posts, there were two major drags on GDP in the fourth quarter.  Business inventories were drawn down and not replaced during the quarter.  During periods of economic growth, this typically leads to increases in inventory in subsequent quarters, which spurs future GDP growth. As a result, this effect may be temporary, rather than the beginning of a new trend.

The model forecasts from 2000 to 2/1/2013 are included in Figure 1 below (blue).  The purple line illustrates the actual quarterly GDP data.  Both lines use the left vertical axis.  The most recent "actual" GDP observation represents an interpolation of last quarter's actual data and next quarter's consensus forecast of +1.7%.  The gray shaded regions represent past U.S. recessions as defined by the National Bureau of Economic Research (NBER). 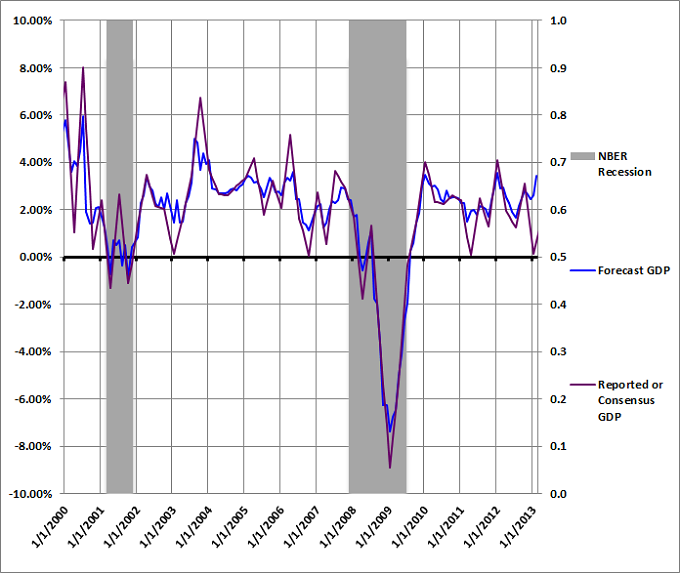 The interpolated, annualized real GDP growth rate for the three-month period ending 02-01-2013 was only 0.65%, which represents an increase of 0.55% from the recently reported GDP growth rate for the fourth quarter.  The model estimate for the three months ending 02-01-2013 was a surprisingly strong 3.44%, up 0.81% from the revised Q4 2012 forecast of 2.63%.  As was the case in the fourth quarter, the latest model forecast was significantly above the actual interpolated GDP data.

The GDP neural network model is still in the experimental stages.  Unfortunately, it does not currently use any explanatory variables that measure the effects of inventory changes or reductions in government expenditures on GDP.  This may limit the effectiveness of the model going forward if further austerity measures are implemented at the state and federal level.  Time permitting, I would like to research new variables that could capture these effects on a timely basis.

Despite these limitations, the month to month increase in the rolling three month forecast is a very positive sign for the U.S. economy.

I have been an investment professional for over 30 years. I worked as a fixed income portfolio manager, personally managing over $13 billion in assets for institutional clients. I was also the President of a financial consulting and software development firm, developing artificial intelligence based forecasting and risk management systems for institutional investment managers. I am now a full-time proprietary trader in options, futures, stocks, and ETFs using both algorithmic and discretionary trading strategies. In addition to my professional investment experience, I designed and taught courses in financial derivatives for both MBA and undergraduate business programs on a part-time basis for a number of years. I have also written four books on options and derivative strategies.
View all posts by Brian Johnson →
This entry was posted in Economic Indicators, Fundamental Analysis, GDP Forecasting Model, Market Timing and tagged GDP forecast, GDP forecasting, neural network, Q1 2013 GDP forecast, trader, Trader Edge aggregate GDP model. Bookmark the permalink.