The Economic Cycle Research Institute (ECRI) is one of the leaders in business cycle forecasting, but they had one spectacular and very public forecasting failure in the fall of 2011 - when they predicted an imminent U.S. recession. Until that time, ECRI had never missed a recession forecast.  Given ECRI's flawless track record, in early 2012 I decided to override several timely and very profitable buy signals from my systematic equity strategies.  The opportunity cost was significant.

I learned an important lesson from this experience.  It is very difficult to integrate external, proprietary research tools and forecasts into my investment process.  While ECRI's track record was impressive, their proprietary process was opaque.  As a result, I had no way of understanding or evaluating their recession forecast or its implications for my strategies.

This realization led me to develop the Trader Edge recession forecasting models.  These models may or may not be superior to ECRI's framework, but at least I know every input variable and the mechanics behind each of the Trader Edge model forecasts.

As you might expect, I am somewhat biased when it comes to ECRI, but I am disappointed that they never revised their recession forecast, despite data from their own weekly leading indicator series that directly contradicted their earlier recession forecast.

Instead of reevaluating their forecast, they recently published a new report based on nominal GDP growth that purports to support their recession forecast from almost two years earlier.  Unfortunately, using nominal GDP growth (in periods with wildly different inflationary environments) to identify recessionary periods is not a fundamentally sound approach.  This article explores this relationship in more detail.

Figure 1 below is a graph from the recent ECRI report. The blue line represents the year-over-year growth in nominal GDP since 1980.  The four shaded regions denote U.S. recessions.  The segments of the line depicted in red indicate year-over-year nominal GDP growth below ECRI's recession threshold of 3.7%.

We see the same relationship at the beginning of the 2008 recession.  Nominal GDP growth was above 4% and inflation was also approximately 4%.  Again, not a coincidence. 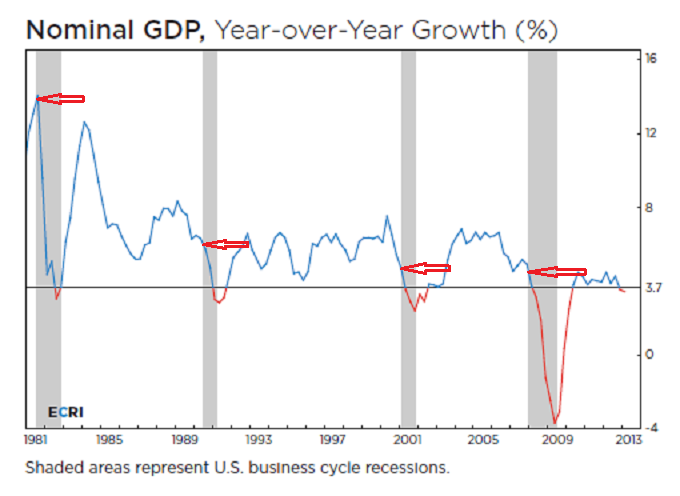 In an attempt to support their 2011 recession forecast, ECRI emphasizes that year-over-year nominal GDP growth has again dropped below 3.7%.  They cite this as evidence that the U.S. is in a recession.  Unfortunately, ECRI fails to recognize that the current rate of inflation has dropped to 1%.  Nominal GDP growth of near 3.7% and annual inflation of 1% are consistent with the most recent estimate of Q1 2013 real GDP growth of 2.4%.

Figure 2 below includes candlestick charts of the S&P 500 index in the top panel and ECRI's proprietary weekly leading indicator series in the second panel. 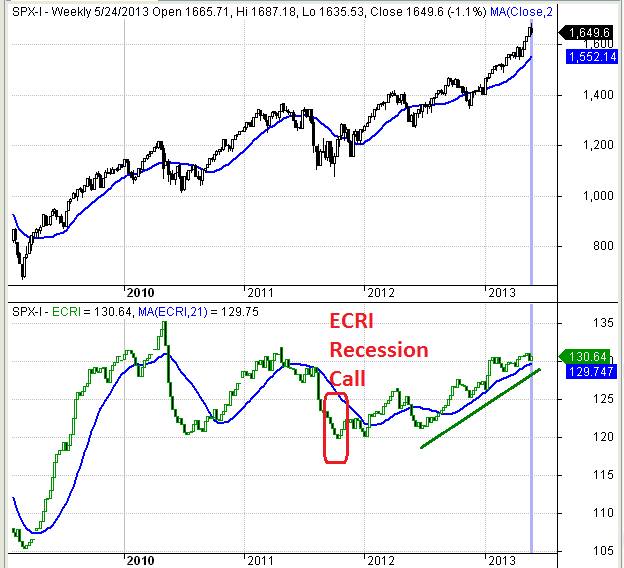 As is evident in the chart above, the WLI was decreasing when ECRI announced their recession call in the fall of 2011.  However, the WLI has increased significantly since early 2012.  While the U.S. economy might suddenly reverse course and enter a recession,  that scenario is not currently supported by the data - including ECRI's WLI data.

The equity market is overbought by technical measures, overvalued by fundamental metrics, and is long overdue for a correction.  Nevertheless, the U.S. economic and market data is not consistent with past recessionary environments.  It is disappointing that ECRI continues to cling to their 2011 recession call, despite overwhelming evidence to the contrary.  It is even more disturbing that they are now focusing on nominal GDP growth to support their position.

If you found the information on www.TraderEdge.Net helpful, please pass along the link to your friends and colleagues or share the link with your network connections.

I have been an investment professional for over 30 years. I worked as a fixed income portfolio manager, personally managing over $13 billion in assets for institutional clients. I was also the President of a financial consulting and software development firm, developing artificial intelligence based forecasting and risk management systems for institutional investment managers. I am now a full-time proprietary trader in options, futures, stocks, and ETFs using both algorithmic and discretionary trading strategies. In addition to my professional investment experience, I designed and taught courses in financial derivatives for both MBA and undergraduate business programs on a part-time basis for a number of years. I have also written four books on options and derivative strategies.
View all posts by Brian Johnson →
This entry was posted in Economic Indicators, Fundamental Analysis, Market Timing, Recession Forecasting Model and tagged Economic Cycle Research Institute, ECRI, inflation, nominal GDP growth, real GDP growth, recession forecast, WLI. Bookmark the permalink.