This article presents the Trader Edge aggregate neural network model forecast for the February 2014 non-farm payroll data, which is scheduled to be released tomorrow morning at 8:30 AM EST.

We saw the same pattern last month, which strongly suggests the actual January NFP data was adversely affected by weather.   The actual NFP jobs data in January of 113,000 was a full standard error below the January estimate.  This happened in December as well and the magnitude of the effect was even greater.   Observations that far below the forecasts means that the actual NFP data in December and January data were  inconsistent with the data from the explanatory variables.

The model is forecasting a significant decline in the NFP data from January to February (-54,000 jobs).  However, one reason for the sharply lower forecast in February is the depressed NFP data for the last two months.  The model uses past NFP data as one component of its current forecast.  If the past data was affected by unusual adverse weather conditions, then it would also affect the current forecast.

It is interesting to note that the consensus estimate is for a 50,000 increase in NFP from January to February, which directly contradicts the model forecast change of minus 54,000 jobs.  That disparity suggests that market participants believe that the January data was an anomaly and that the February data will be more representative of the actual employment conditions.

Given the data anomalies in December and January, which may or may not be due to the recent winter weather conditions, it will take another month or two of "normal" weather until we can get a clearer picture of the strength of the employment market. 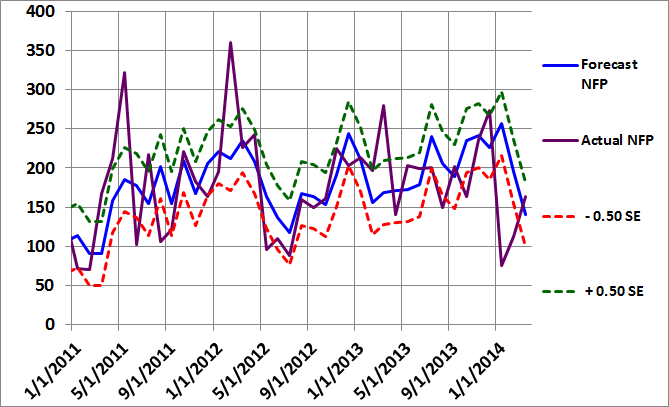 In the case of the NFP data, the monthly report is notoriously unreliable and prone to substantial revisions.  As a result, having an independent and unbiased indicator of the health of the U.S. job market is especially important.

I have been an investment professional for over 30 years. I worked as a fixed income portfolio manager, personally managing over $13 billion in assets for institutional clients. I was also the President of a financial consulting and software development firm, developing artificial intelligence based forecasting and risk management systems for institutional investment managers. I am now a full-time proprietary trader in options, futures, stocks, and ETFs using both algorithmic and discretionary trading strategies. In addition to my professional investment experience, I designed and taught courses in financial derivatives for both MBA and undergraduate business programs on a part-time basis for a number of years. I have also written four books on options and derivative strategies.
View all posts by Brian Johnson →
This entry was posted in Economic Indicators, Fundamental Analysis, Market Timing, NFP Forecasting Model and tagged February 2014 NFP Forecast, monthly employment report, non-farm payroll, non-farm payroll forecast, trade, trader, Trader Edge. Bookmark the permalink.