The recent sell-off in the equity markets and the dramatic increase in volatility has raised serious concerns among many traders and investors. The fact that the sell-off is occurring in October and the expansion is in its fifth year has further stoked those fears. The following article applies several different technical indicators to the Russell 2000 Index (RUT) in the weekly, monthly, and daily time frames.

Now, let's draw some conclusions from the chart.  The first red vertical box in January of 2014 denotes the week that the RSMTI closed below its short-term moving average, forecasting a possible trend change. A few weeks later (next red vertical box), the short-term moving average of the RSMTI crossed below the intermediate-term moving average of the RSMTI, where it has remained throughout 2014. This confirmed the trend change warning. The RSMTI is one of the few indicators that leads price, often significantly. It has been very difficult historically for the equity market to sustain rallies in the face of weakening relative strength.

The red vertical box on the far right side of the chart notes the week that the cumulative advance decline line dropped below its moving average. If equity rallies are difficult to sustain during periods of weakening relative strength, they are almost impossible to sustain with declining breadth AND relative strength.  The recent problems in the equity market should not be a surprise. The equity markets will not fully recover until both relative strength and breadth improve across all time frames.

On the positive side, the last panel illustrates that the equity markets are oversold, based on recent changes in breadth. However, as you can see from the chart, the markets can remain oversold or overbought for extended periods. 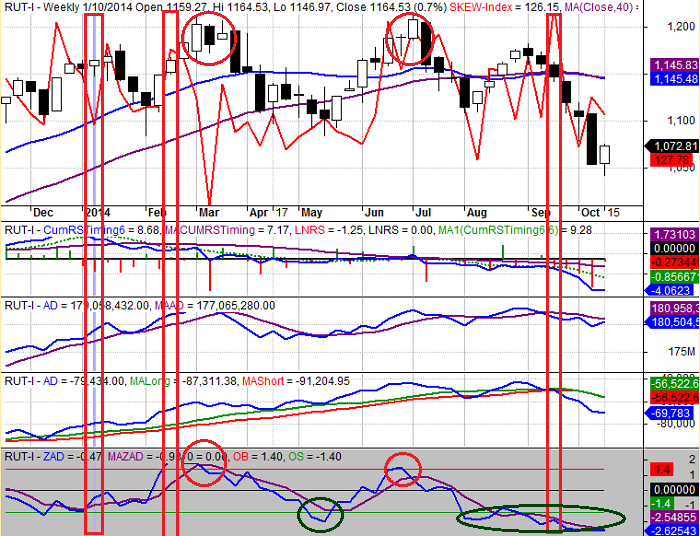 The Monthly candlestick chart for RUT is depicted in Figure 2 below.  The five panels contain the same indicators as Figure 1.  Instead of focusing on the indicators in the panel, notice that the closing price of RUT dropped below the pink 17-month moving average line at the end of last month (September). Why is this significant? 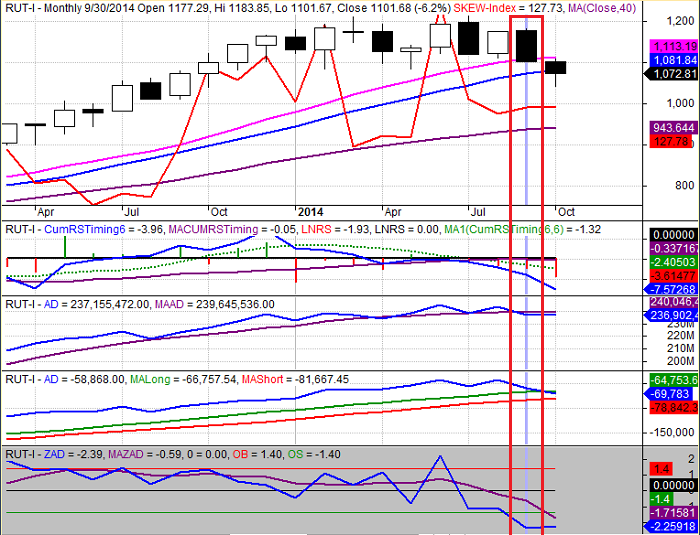 The daily candlestick chart for RUT is depicted in Figure 2 below.  The five panels contain the same indicators as Figures 1 and 2. The primary trend information is gleaned from the monthly and weekly charts above, but the daily chart shows another red flag. The first red vertical bar below highlights the recovery day on October 8th, 2014. After declining the day before, RUT rebounded by 1.9% on the 8th, completely offsetting the prior day's loss of 1.7%. This type of reversal is typically very bullish for equities, but not in this case - and the warning sign is clearly depicted in the chart.

The daily change in the RSMTI is represented by the green and red histogram bars. On the strong up move on the 8th, the RSMTI was negative, suggesting that the rebound was not supported by relative strength. On the strong up day, the RSMTI should have been a large positive number; instead, it was negative. RUT rebounded again yesterday (10/15/14), but look at yesterday's RSMTI: negative again. This does not mean that the market will not rebound again in the next few days and I would certainly hesitate to read too much into any one indicator, especially for a single day, but the weakness in relative strength and breadth is very troubling across all time frames. 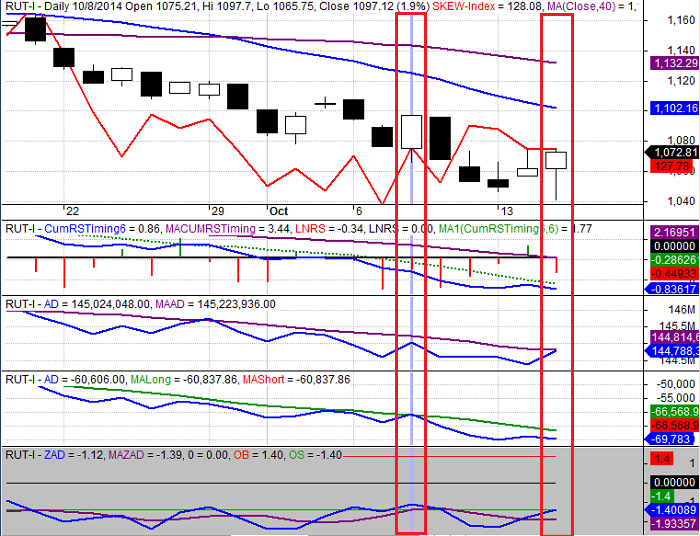 The technical indicators for RUT look worse than the indicators for the SPX and NDX, but RUT is frequently the canary in the coal mine. Unless breadth and relative strength begin to improve across all time frames, the bull-market in equities is on thin ice.

I have been an investment professional for over 30 years. I worked as a fixed income portfolio manager, personally managing over $13 billion in assets for institutional clients. I was also the President of a financial consulting and software development firm, developing artificial intelligence based forecasting and risk management systems for institutional investment managers. I am now a full-time proprietary trader in options, futures, stocks, and ETFs using both algorithmic and discretionary trading strategies. In addition to my professional investment experience, I designed and taught courses in financial derivatives for both MBA and undergraduate business programs on a part-time basis for a number of years. I have also written four books on options and derivative strategies.
View all posts by Brian Johnson →
This entry was posted in Equity Market Snapshot, Market Breadth, Market Commentary, Market Timing, Technical Analysis and tagged accumulation distribution, advance decline, CBOE Skew index, market timing, relative strength, relative strength market timing indicator. Bookmark the permalink.