This article presents the Trader Edge aggregate neural network model forecast for the October 2016 non-farm payroll data, which is scheduled to be released tomorrow morning at 8:30 AM EDT.

The aggregate neural network model forecast for October is only 154,000, which is down materially (-32,000) from last months forecast of 186,000, reflecting a significant deterioration in the employment environment during the month of October. The Briefing.com consensus estimate for October is 175,000, which is up modestly (+19,000) from the actual September NFP data (156,000).

The actual September data was notably below the forecast (-0.37 S.E.). The consensus estimate for October is higher than the October model forecast (+0.26 S.E.). Neither September or October appear to be outliers, which reduces the likelihood of a material surprise tomorrow. 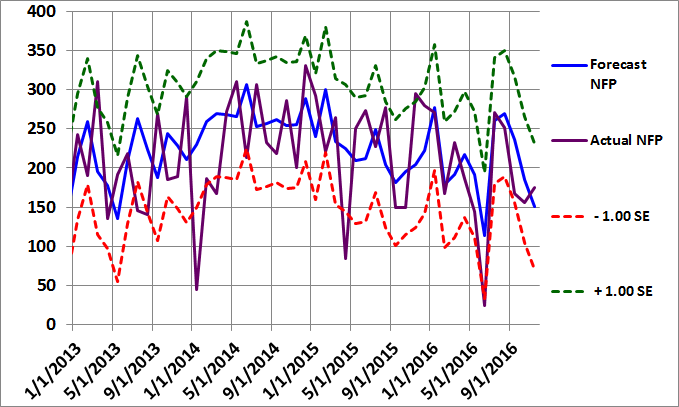 As you can see from the chart in Figure 3, the slope had been negative since early 2015, but briefly stabilized and even turned positive for a few months. Unfortunately, the trend has now reversed again and is heading downward. To make matters worse, the last two NFP model forecasts were below the 12-month moving average, which is indicative of a deteriorating employment sector. 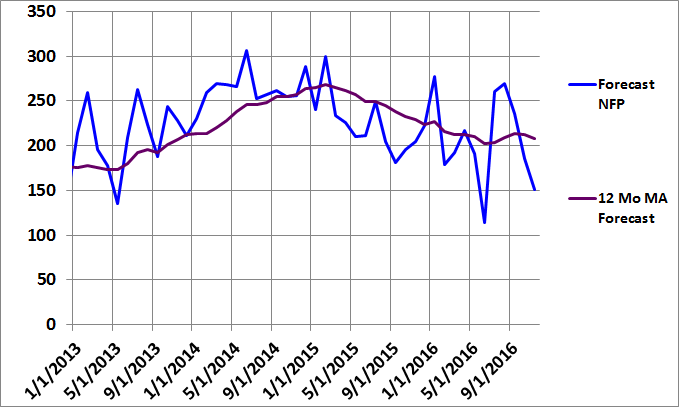 The October consensus NFP estimate is only slightly higher than the NFP model forecast, but does suggest a downward bias to tomorrow's NFP number. This would further reduce the probability of any imminent Fed intervention at their upcoming meetings.

Option Income Strategy Trade Filters: An In-Depth Article Demonstrating the Use of Trade Filters to Enhance Returns and Reduce Risk

I have been an investment professional for over 30 years. I worked as a fixed income portfolio manager, personally managing over $13 billion in assets for institutional clients. I was also the President of a financial consulting and software development firm, developing artificial intelligence based forecasting and risk management systems for institutional investment managers. I am now a full-time proprietary trader in options, futures, stocks, and ETFs using both algorithmic and discretionary trading strategies. In addition to my professional investment experience, I designed and taught courses in financial derivatives for both MBA and undergraduate business programs on a part-time basis for a number of years. I have also written four books on options and derivative strategies.
View all posts by Brian Johnson →
This entry was posted in Economic Indicators, Fundamental Analysis, Market Commentary, Market Timing, NFP Forecasting Model, Risk Management and tagged monthly employment report, non-farm payroll, non-farm payroll forecast, October 2016 NFP Forecast, trade, trader, Trader Edge. Bookmark the permalink.