I read an interesting article by Neil Azous in the December 2015 issue of Modern Trader ("Has the Golden Moment Passed?") that inspired me to do some further research into modeling gold prices. The resulting research greatly enhanced my understanding of the fundamental drivers of gold prices and even corrected several misconceptions that I have carried with me for the past 30 years.

Finally, I combined the real 10-year yield with the annual CPI variables into a single explanatory variable: the nominal yield of the 10-year UST note. Before doing so, I confirmed that the regression coefficients for both variables were almost identical and had comparable explanatory power. Whenever possible, it is preferable to limit the number of independent regression variables.

The resulting regressions only had two underlying explanatory variables: the nominal 10-year UST yield and the U.S. Dollar index. I used natural log transformations on all variables to improve the fit of the regression models and to eliminate the potential for negative gold prices in the model.

The regression results were statistically significant and very instructive.

As a reminder, the first regression used the nominal yield of the 10-year UST note and the U.S. Dollar index to explain the spot price of gold. The regression period included monthly data from December 1985 to December 2015, 30 years of monthly data. The R squared value for the regression was 0.7874, which indicates that 78.74% of the variation in the price of gold was explained by the regression - a very powerful result for only two explanatory variables.

The absolute value of the t-statistics for the intercept and two beta coefficients were all above 15. The beta coefficients for the Nominal 10-year UST yield and the U.S. Dollar Index were both negative and highly significant. In other words, there is no question that there is an inverse relationship between the 10-year UST yields and the price of gold and between the U.S. Dollar index and the price of gold.

The R squared value for the regression was 0.4333, which indicates that 43.31% of the variation in the percentage change in the price of gold was explained by the regression. This was not as powerful as the first regression, but still impressive for a two variable model.

The absolute value of the t-statistics for the two beta coefficients were all above 9.5. The beta coefficients for the changes in the nominal 10-year UST yield and changes in the U.S. Dollar Index were both negative and highly significant. As was the case in the first regression, there is no question that there is an inverse relationship between the 10-year UST yields and the price of gold and between the U.S. Dollar index and the price of gold. 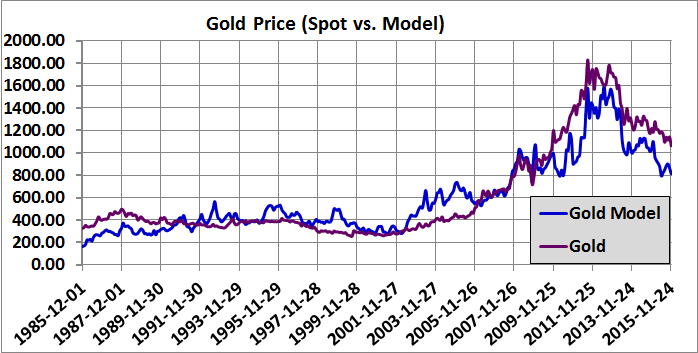 I also included a second chart below in Figure 2 to make it easier to see the magnitude of overvaluation or undervaluation. Positive values indicate that gold is undervalued (Model > Spot) and negative values represent periods when gold was overvalued (Model < Spot). These values are expressed in percentage terms, which represent the return to gold if the spot price instantaneously corrected to the model price. 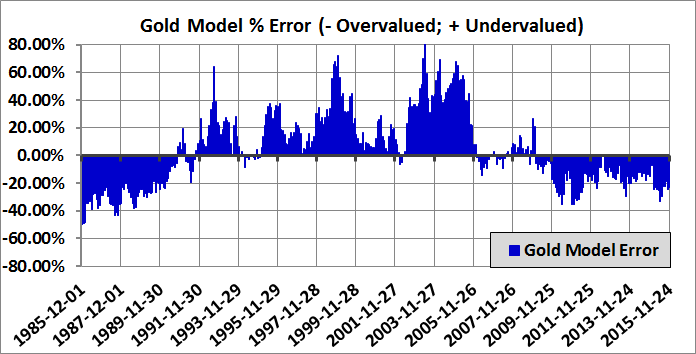 I already knew that gold prices were inversely related to the price of the U.S. Dollar. However, I am embarrassed to admit that I still believed that gold prices were positively influenced by inflation. In other words, I believed the standard gold bug sales pitch: gold is an inflation hedge. It certainly sounded plausible and I knew/remembered that the high levels of inflation in the late 70s and early 80s were associated with a very large spike in the price of gold. While my recollection was accurate, the positive relationship between inflation and gold prices has not held for over 30 years.

Increases in both real yield AND inflation have resulted in decreases in gold prices for the past 30 years. One caveat: the maximum nominal 10-year UST yield in the above data set was only 9.5%. It would be dangerous to extrapolate this regression model for yields above 9.5%.

The regression model also provides objective, real-time information on the value of gold. As of December 1, 2015, the regression model indicates that gold is still overvalued by 23.55%, even after suffering a 42% decline over the past five years - not good news for the gold bugs. If the dollar continues to increase in value and 10-year UST rates continue to rise, the implications for gold would be even worse.

I have been an investment professional for over 30 years. I worked as a fixed income portfolio manager, personally managing over $13 billion in assets for institutional clients. I was also the President of a financial consulting and software development firm, developing artificial intelligence based forecasting and risk management systems for institutional investment managers. I am now a full-time proprietary trader in options, futures, stocks, and ETFs using both algorithmic and discretionary trading strategies. In addition to my professional investment experience, I designed and taught courses in financial derivatives for both MBA and undergraduate business programs on a part-time basis for a number of years. I have also written four books on options and derivative strategies.
View all posts by Brian Johnson →
This entry was posted in Fundamental Analysis, In-Depth Article, Market Commentary, Market Timing, Strategy Development and tagged 10-year UST yields, fundamental analysis, gold, regression, U.S. Dollar Index. Bookmark the permalink.