How to Generate Automated Trendlines

At the end of every article, I solicit topic suggestions from readers.   The following is recent request from Pete Kasper, which provided the inspiration for this article:

I continue to enjoy your cogent articles week after week. I’d like to respond to your request for topics for future articles. As a retired physicist I tend to favor analysis systems that use statistical backtesting and walk-forward testing. In monitoring price series it is clear that basic technical analysis tools such as support and resistance lines and even trend lines are powerful tools but don’t seem to be adaptable to computerized testing. The proposed topic then is “How to work with support, resistance and trend lines in an otherwise back testing system."

I agree with Pete that trendlines are very powerful tools; unfortunately, they are notoriously difficult to program for use in systematic strategies.  I use trendlines regularly, but have always drawn them by hand.  I have thought about automating this process before, but it never made it to the top of my project list - until now.  Pete's request gave me the incentive to do some preliminary work on the topic.

I recently posted an article titled "How to Draw Trendlines & Avoid Severe Losses."  In that article, I provide a set of objective, unambiguous rules for drawing trendlines. The following article explains how to use those  rules to generate trendlines on all of your charts. Automatically.  The AMIBroker code segments used to generate automated support and resistance lines are provided at the end of this article.

The purpose of trendlines is to identify areas of support and resistance, which allows us to know when those areas have been violated, which helps us identify changes in the trend.  A bullish trendline is an upward-sloping line connecting two (or more) lows.  It lies below the price action, providing an area of support.  A bearish trendline is a downward-sloping line connecting two (or more) highs.  It rests above the price action, acting as an area of resistance to higher prices.

Unfortunately, the descriptions above are too general for constructing a specific trendline.  We need a set of objective rules to determine which highs and which lows to use when creating our trendlines.    Below are the rules for drawing bullish support lines.

The preceding rules were intended for drawing trendlines manually. As a result, they allowed users to select their desired time horizons, which were used to identify the beginning date for each trendline.  Unfortunately, computer programs do not make discretionary decisions; they require objective algorithms.

Steps two through four above are objective and unambiguous.  However, to automate trendline construction I needed to provide a specific rule for identifying the origin of the trendline.  For support lines, I used the lowest low within the user-specified look-back period.  For resistance lines, I used the highest high.  I will discuss the implications of these rules later in the article.  For now, let's proceed with two examples.

While trendlines are powerful, I never like to rely on individual indicators, even in examples.  As a result, I added the MACD indicator and MACD histogram in the second panel.  However, I cut the standard MACD period parameters in half to make them more responsive.

The trendlines depicted below and the trendline break signals were all generated automatically using the sample AMIBroker code provided at the end of the article.   I also added three vertical lines manually to help you identify the one bullish and two bearish trendline breaks on the chart.

Now take a look at the second bearish trendline break on the far right-hand side of the crude oil chart.  Notice that the weekly closing price was still above the six-week moving average AND the MACD line was still above the MACD signal line on the date of the break.  This bearish signal was not confirmed.

My custom commitment of traders (COT) indicator for crude oil (not shown) was bearish as well, but the level was not sufficiently extreme to confirm a bearish trade.  While crude oil prices may in fact reverse direction, it is always prudent to use multiple indicators to confirm trading signals.

In addition, shorting crude oil always makes me nervous, especially in light of the escalating tensions between Israel and Iran.  In this environment, vertical debit spreads with fixed maximum losses might be safer vehicles for bearish positions in crude oil, heading oil, and gasoline than short futures positions. 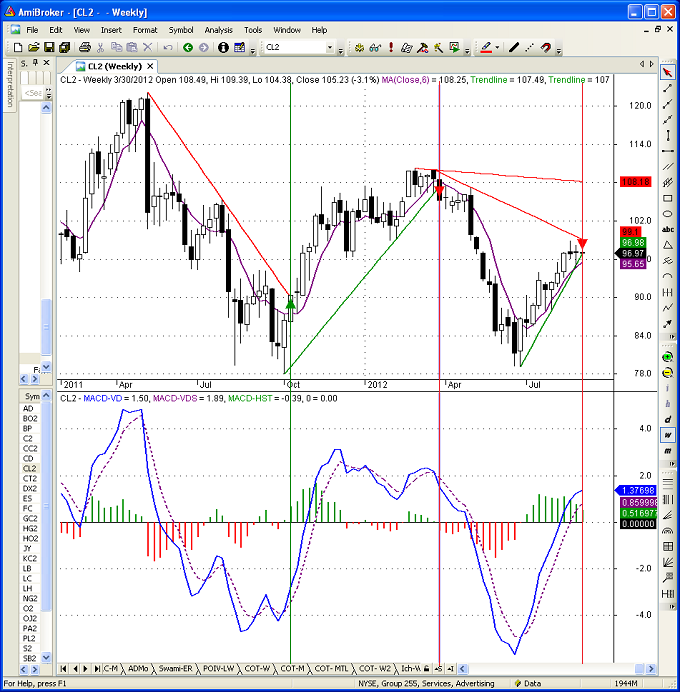 Figure 2 below is a weekly chart of the Japanese Yen continuous futures contract through September 7, 2012.  The format and parameters used are the same as those in Figure 1 above.  There were only two trendline breaks on the Japanese Yen chart below: one bullish and one bearish. 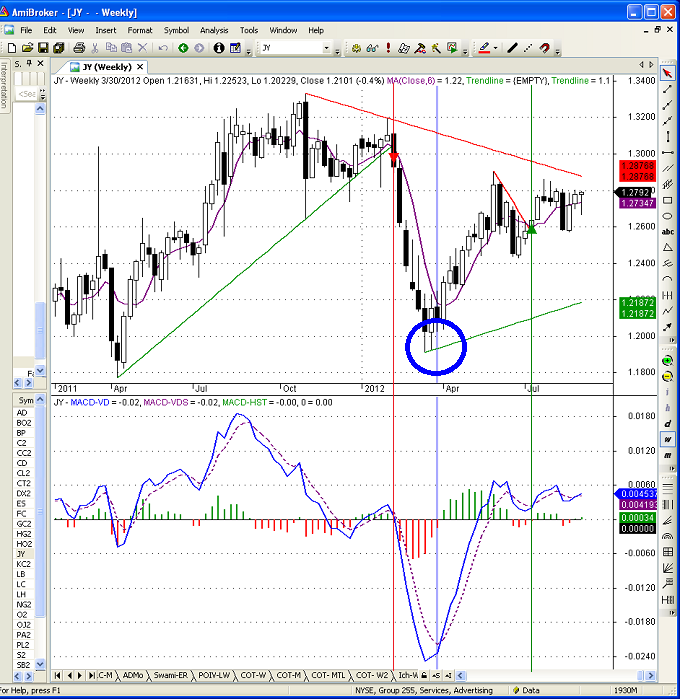 At this stage, the code used to generate the automated trendlines is little more than a functional prototype used to demonstrate a proof of concept.  Much more work would be required before using the code in an investment process.  However, the initial results are very encouraging and I wanted to respond to Pete's topic request in a timely fashion.

There are two main issues outstanding.  First, I am not happy with the rule used to define the starting date of the trendline.  Using the date of the lowest low or the highest high is logical, but that date does not necessarily signify the beginning of the trend.

In Figure 2 above, notice that the support line begins at the bar with the lowest low (inside the blue circle).  Unfortunately, the shallowest slope used to determine the trend is determined by the very next bar.  While this is consistent with the rules, I would not use this specific trendline in practice.

Instead, I would have started the trendline one bar to the right.  The resulting trendline would have been a much better reflection of the uptrend.  In addition, it would never be appropriate to extrapolate the slope of adjacent lows (or highs) into the future to define support or resistance lines.  Determining the optimal starting point for a trendline is easy to do visually on a case-by-case basis, but more challenging to describe and program as an algorithm.  Nevertheless, the current rule should be modified to select more appropriate starting points.

The second drawback is that the current code only generates trendlines (and trendline break signals) looking backward from today.  It does not generate all trendlines and signals that would have existed historically, which currently precludes backtesting.  Obviously strategy development and backtesting were Pete's ultimate objectives when he requested this topic (they are my ultimate objectives as well).  Nevertheless, the initial code is a step in the right direction and could be modified for use in systematic strategies.

Even as a prototype, the current code could be used to generate multiple trendlines automatically for a range of look-back periods.  In addition, it would be straightforward to modify the current code to scan a large number of prospects for trendline breaks or for trend direction based on the location of the closing price relative to the support and resistance lines.

The following two AMIBroker code samples were used to generate the automated support and resistance lines in the previous examples.  Both are prototypes that require further work. The code samples are provided for educational purposes only.  Please read the Disclaimer and Terms for more information.

The images below are screen shots from AMIBroker.  As a result, you will need to type the code into your AMIBroker software manually; typos will cause compile or run-time errors.  The code below compiles and runs without errors on my machine. 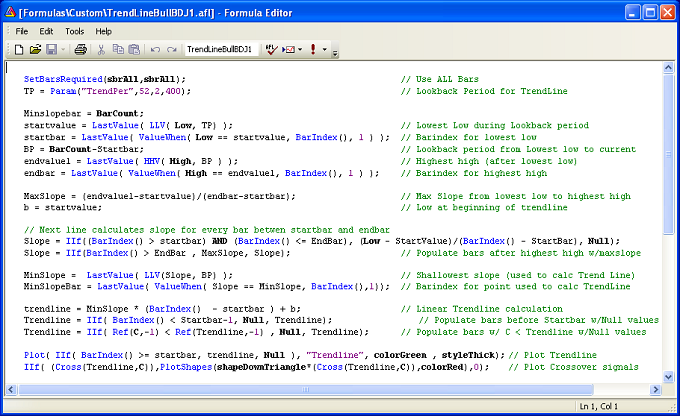 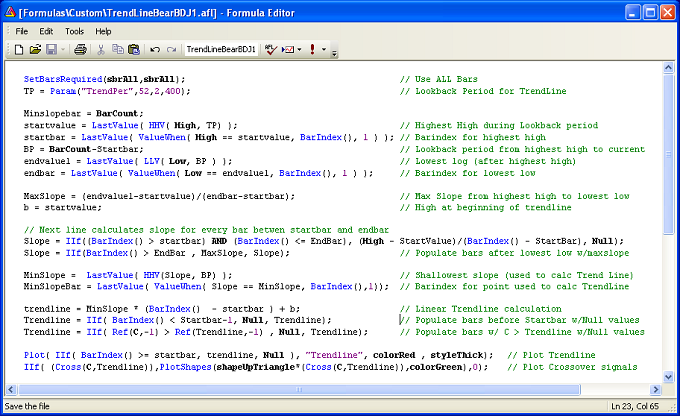 Eventually, automated trendline breaks could be used to generate systematic trading signals and the resulting trendlines could also be used to confirm signals from other systems.  For now, it is amazing to be able to scroll from chart to chart and from period to period without having to manually draw the trendlines.  Pete, thanks again for the topic suggestion; I hope you find the initial work on automated trendlines to be helpful.

I have been an investment professional for over 30 years. I worked as a fixed income portfolio manager, personally managing over $13 billion in assets for institutional clients. I was also the President of a financial consulting and software development firm, developing artificial intelligence based forecasting and risk management systems for institutional investment managers. I am now a full-time proprietary trader in options, futures, stocks, and ETFs using both algorithmic and discretionary trading strategies. In addition to my professional investment experience, I designed and taught courses in financial derivatives for both MBA and undergraduate business programs on a part-time basis for a number of years. I have also written four books on options and derivative strategies.
View all posts by Brian Johnson →
This entry was posted in COT Analysis, In-Depth Article, Market Commentary, Market Timing, Risk Management, Technical Analysis and tagged AMIBroker Automated Trendlines, AMIBroker Code, Automated Trendlines, resistance lines, support lines, trendline breaks, trendlines. Bookmark the permalink.

9 Responses to How to Generate Automated Trendlines