Last week I introduced a framework for adding to losing positions safely.  It is also possible to enhance returns without increasing risk by adding to your winning positions.  The approach is called pyramid trading (not to be confused with pyramid schemes, which are obviously illegal).  This article uses a simple trade example to demonstrate how to apply pyramid trading to any long-term trend-following strategy.  The secret is position-dependent stop levels.

Pyramid trading can be used with long or short positions.  However, to keep things simple and as intuitive as possible, I will describe pyramid trading in terms of long positions (purchases).   The foundation or base of the pyramid begins with the first purchase of a specified number of shares of stock or futures contracts. Incremental purchases are made when the price rises by a predetermined amount or when a new trading signal is triggered.  Each purchase adds a new layer to the pyramid.  By construction, the number of shares or contracts traded must decrease with each incremental purchase.  Finally, stop levels must be adjusted (increased) after every purchase to ensure risk does not increase as the size of the position grows.

The payoffs from profitable pyramid trades can be huge.  However, due to the increase in stop levels, pyramid trading will reduce the number of profitable trades.  As a result, pyramid trading should only be used with long-term strategies that are designed to capitalize on long-term trends.  These types of strategies provide the optimal environment for capturing prolonged price movements with extremely large positions.

Gold is one of the most popular trend-following instruments.  For example purposes, we will examine a trend-following pyramid trade in gold futures (GC) from January 2009 to February 2013.   The top panel in Figure 2 below is a weekly candlestick chart of the continuous gold futures contract.  The four vertical lines denote the four pyramid purchases in 2009 and 2010 and the red vertical line marks the trade exit in 2013.

The initial buy and sell signals were generated with a very basic (sample) trend-following strategy.  The initial buy signal was generated when the weekly closing price exceeded the highest high of a given number of weeks (jagged green horizontal line).  The sell signal was generated when the weekly closing price fell below the lowest low of a specified number of weeks (jagged red horizontal line).  The first purchase was made on January 23, 2009 at $930.80 and the entire position was closed on February 15, 2013 at $1614.94 (at which point a new short position would have been established).

The blue line in the bottom panel of Figure 2 below represents the Average True Range (ATR), which is one of the many indicators created by J. Welles Wilder.  At the inception of the trade on January 23, 2009, the ATR of the continuous gold futures contract was $68.46, which was a proxy for the average weekly price movement (or volatility) of gold. 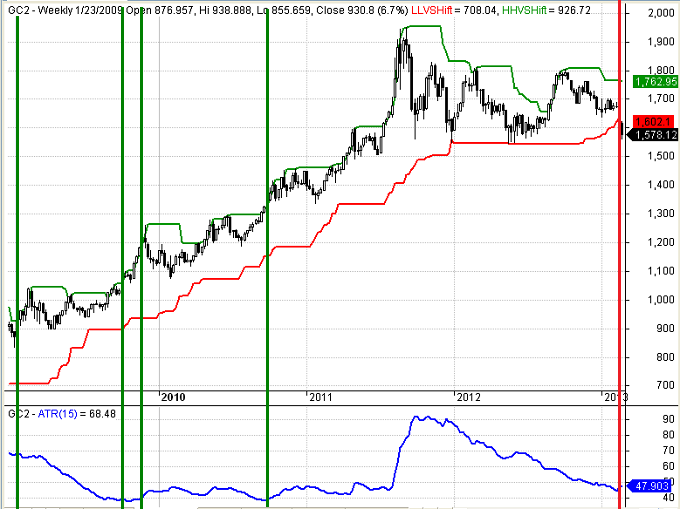 The key to pyramid trading is calculating the correct stop level after every incremental purchase. The original purchase price and stop level established a maximum loss amount of $54,768, which we will assume is a reasonable percentage of the trader's total capital (see “Stop Loss Orders are Not Enough.”).

Notice that we have increased the number of contracts, but the maximum loss remains the same (assuming we were able to liquidate the entire position at the stop price).

The same process is used to calculate the stop level after the fourth and final purchase.  The stop levels were never hit.  The sell signal occurred on February 15, 2013 and all 10 contracts were sold at a price of $1,614.94. The total gain was $547,220.  Without employing the pyramid structure, the total gain on four contracts would have been $273,656.  In this example, the pyramid structure doubled the total profit without increasing the amount of capital at risk.

Using a pyramid trading strategy to add to winning positions can be very profitable.  However, pyramid trading should only be used in conjunction with long-term trend following strategies that are designed to capture large, extended price moves.  In addition, the number of shares or contracts traded must decrease with each incremental purchase and the stop levels must be increased after every purchase to ensure risk does not increase as the size of the position grows.  If you follow these rules with the appropriate strategy, you could enhance your returns without increasing your risk.

I have been an investment professional for over 30 years. I worked as a fixed income portfolio manager, personally managing over $13 billion in assets for institutional clients. I was also the President of a financial consulting and software development firm, developing artificial intelligence based forecasting and risk management systems for institutional investment managers. I am now a full-time proprietary trader in options, futures, stocks, and ETFs using both algorithmic and discretionary trading strategies. In addition to my professional investment experience, I designed and taught courses in financial derivatives for both MBA and undergraduate business programs on a part-time basis for a number of years. I have also written four books on options and derivative strategies.
View all posts by Brian Johnson →
This entry was posted in In-Depth Article, Risk Management, Strategy Development and tagged position sizing, pyramid trading, risk management, strategy development, trade, Trader Edge, trend following. Bookmark the permalink.