Are the Seasonal Trends Working this Year?

Knowing the historical seasonal tendencies of our trading instruments can dramatically improve our returns, but how much weight should we assign to seasonal trends?  What should we do if our other indicators are bearish and the historical seasonal trend is bullish?  Should we still establish a bullish position?  Should we do the trade, but reduce the magnitude of the trade relative to our normal position size?  How do we make these decisions?

In some environments, the impact of abnormal events will swamp the normal effects of seasonal supply and demand factors.  When those events occur, we should reduce our emphasis on seasonal trends. This article will introduce a simple and objective technique for evaluating recent return performance relative to historical seasonal trend patterns.

A few weeks ago, I introduced two of my custom seasonal indicators in a post titled "Harness the Power of the Seasons." The first indicator is the easiest to understand and I will use it throughout this article; it calculates the average compound annual return (CAR) for a user-specified holding period over an historical time period chosen by the user.

For example, let's assume that we wanted to evaluate the returns for 4-week holding periods since 1990, each beginning in a different week of the year. The 4-week periods would obviously have some overlap.  The indicator would calculate the average compound annual return for 4-week trades beginning in each calendar week for the period 1990 to present. In other words, there would be 52 separate CAR values, one for each week of the year.  If we were evaluating a trade in the first week of April, we would look at the average compound annual return for all 4-week holding periods which began in the first week of April.

In early-April of 2012, many of my indicators revealed that the equity markets were overbought and due for a correction - or at least a consolidation.  I do not advocate initiating short positions after strong and sustained uptrends.  However, with the appropriate indicator readings, I will sell bear call-spreads (credit spreads) one or more standard deviations out-of-the money in these environments.

In the future, I will devote an entire article to credit spreads.  For now, credit spreads involve buying and selling two options of the same type.  In this case, I would have sold a call option with a strike price one standard deviation out-of-the money (above the current S&P 500 Index price) and purchased a second call option with a slightly higher strike price.  The resulting bear call spread would make money if prices declined, if prices remained stable, or if prices increased modestly.  This trade would only lose money if the market continued to move significantly (at least one standard deviation) in the same direction as the current trend.

Figure 1 below is a weekly chart of the e-mini S&P 500 futures contract (ES) for 2011 through May 11, 2012.  The top panel is a candlestick chart with a simple 5-week moving average.  The second panel is my weekly seasonal CAR indicator.  The yellow line in the second panel is the zero line.  The CAR indicator values (in the green box) were positive throughout March, April, and early May.  The red vertical line denotes the week that I considered selling the bear call spread on the S&P 500 index.

As I mentioned earlier, my other indicators suggested the market was significantly overbought.  In addition, ES prices had closed below the 5-week moving average for the first time in 16 weeks.  However, at the time, I had no reason to question the validity of the bullish seasonal pattern.  Unfortunately, I missed an excellent opportunity; ES prices pulled back over the next five weeks.  The credit spread would have expired worthless for an 18% gain. 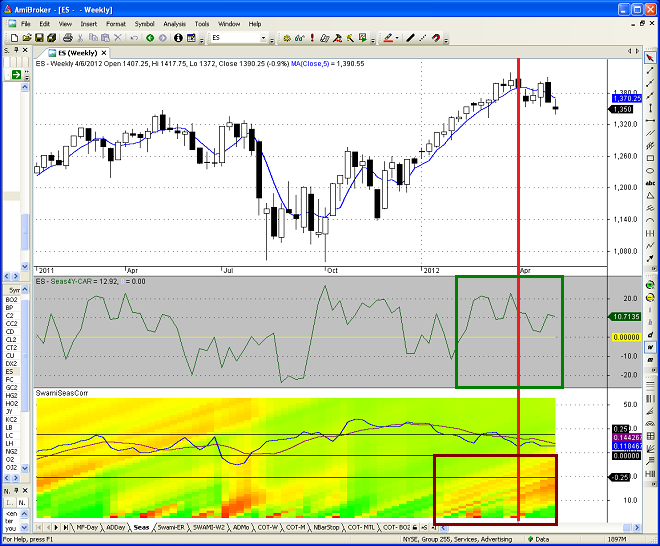 Since my custom indicator already provided seasonal compound annual return (CAR) values, I decided to calculate the correlation between the seasonal CAR values and the actual holding period returns. When correlations were positive, this would mean recent returns were consistent with the seasonal patterns, which would justify placing more weight on the seasonal indicator values.  However, low or negative correlations would suggest that unusual events were temporarily overshadowing the normal influence of seasonal supply and demand factors.  During these periods, it would make sense to reduce the emphasis on seasonal indicators.

Let's revisit the missed bear-call spread trade that I discussed earlier.  In April of 2012 (Figure 1 above), the seasonal pattern for the ES contract was clearly bullish, but the seasonal indicator's recent performance was mediocre at best.  The average correlation (blue line) was less than 0.25 and declining.  It is not uncommon for this indicator to exceed 0.6 or even 0.7 in some periods.

Take a look at the section of the SWAMI heat-map inside the red box.  Notice that the correlations for the majority of the short-term look-back periods were near zero (yellow) or even negative (red).  This new information would have provided justification for discounting the bullish seasonal indicator values and executing the bear call spread.

Seasonal indicators are very powerful tools, but the markets do not always follow seasonal trends.  Being able to accurately measure the recent performance of seasonal indicators makes seasonal tools even more valuable.  All markets have measurable seasonable price patterns, but some markets follow their seasonal trends much more consistently than others.  Knowing the seasonal patterns for all markets and quantifying the accuracy of recent seasonal price patterns will give you a decided advantage in your trading

I have been an investment professional for over 30 years. I worked as a fixed income portfolio manager, personally managing over $13 billion in assets for institutional clients. I was also the President of a financial consulting and software development firm, developing artificial intelligence based forecasting and risk management systems for institutional investment managers. I am now a full-time proprietary trader in options, futures, stocks, and ETFs using both algorithmic and discretionary trading strategies. In addition to my professional investment experience, I designed and taught courses in financial derivatives for both MBA and undergraduate business programs on a part-time basis for a number of years. I have also written four books on options and derivative strategies.
View all posts by Brian Johnson →
This entry was posted in Futures, In-Depth Article, Market Timing, Options, Seasonal Tools, SWAMI Charts, Technical Analysis and tagged bear call spreads, credit spreads, futures, options, seasonal analysis, seasonal pattrens, seasonal tendencies, SWAMI Charts, technical analysis. Bookmark the permalink.