Would you be interested in an indicator that has signaled ten market tops since 1966 without a single false signal?  I read about such an indicator in an article titled "Double Divergences in the Advance-Decline Line," which appeared in the November 2013 issue of Active Trader.  The article was written by Charles Kirkpatrick.

In the article, Kirkpatrick presented compelling evidence that double divergences in the cumulative advance-decline line are always followed by large bear market declines. Even more important, Kirkpatrick observed that a double divergence occurred on August 2, 2013.  Given that I currently have long equity positions; that certainly got my attention.  The following article examines the August 2013 double divergence and explores the implications for the market.

Market Breadth and the Advance-Decline Line

The cumulative advance-decline line is a running total of the number of advancing issues, less the number of declining issues for a specific list of securities. It is typically calculated on the NYSE, NASDAQ, and AMEX exchanges, but it can also be calculated on market indices. The advance-decline line is one of the many market breadth statistics, which are considered to be leading indicators and are widely used to identify major market turning points. If you would like to learn more about market breadth, please revisit one of my favorite articles "The Secret Weapon of Technical Analysis."

Bearish divergences occur when a price series reaches a new high and the predictive indicator does not.  Two consecutive divergences are classified as a double divergence.  Sounds simple enough, but Kirkpatrick makes a critical observation:

"To ensure a divergence is complete and not the result of a timing difference, wait for both the index and a-d line to peak - that is, confirm a high is in place by moving lower. Sometimes the market index will reach a new high before the a-d line, suggesting a divergence is forming, but then become invalid when the a-d line later confirms the new market index high by making a higher high of its own."

A bearish divergence occurs when the price series makes a higher high and the A-D line makes a lower high, but the highs in the price series and A-D line will not necessarily occur on the same date.  This is difficult to explain and challenging to code, but is easy to see on a chart.  Let's look at the 2007 double divergence that foretold the 2008 market meltdown.

The top panel in Figure 1 below is a daily candlestick chart of the S&P 500 index from May 2007 to November 2007.  The bottom panel is the combined, cumulative A-D line for the NYSE, NASDAQ, and AMEX exchanges.  This brings up an important point, large comprehensive data lists produce better leading breadth indicators.  As a result, I use the combined breadth statistics for the the NYSE, NASDAQ, and AMEX exchanges when calculating breadth indicators for my systematic strategies.

This completed the deadly double divergence and correctly signaled the beginning of the great recession. In fact, the double divergence coincided with the high tick in the S&P 500 - the exact market peak.  Signals don't get any better than that. 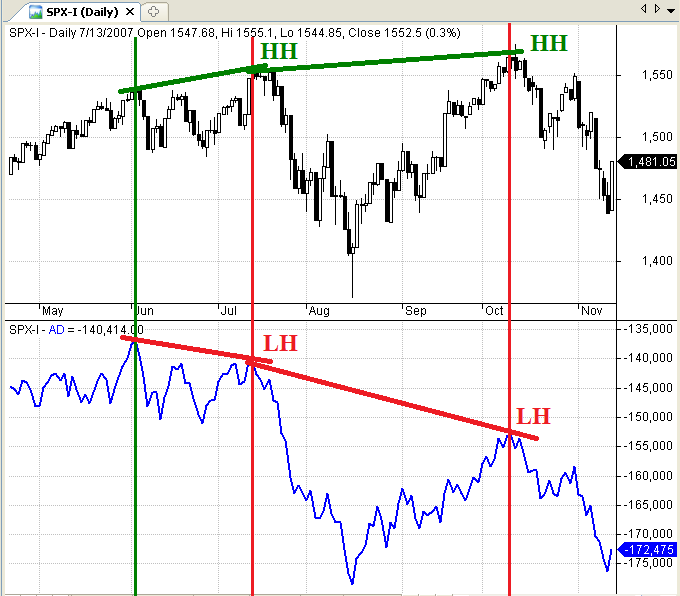 Now let's look at the chart for 2013. The format for Figure 2 below is the same as Figure 1 above.  The top panel in Figure 2 below is a daily candlestick chart of the S&P 500 index from April 2013 to October 2013.  The bottom panel is the combined, cumulative A-D line for the NYSE, NASDAQ, and AMEX exchanges.

So where is the double divergence Kirkpatrick identified in his article?  It is not present in this data.  Why?  First Kirkpatrick used an alternative formula for calculating the A-D line (the Ayers A-D line).  Second, Kirkpatrick did not mention the list of securities used to calculate the A-D line in his article, but it could have been the S&P 500 index.  As I mentioned earlier, when used as a leading indicator, broad definitions of market breadth (NYSE+NASDAQ+AMEX) are much more reliable than narrow definitions (S&P 500).

We have conflicting evidence.  Kirkpatrick recorded a double divergence and I recorded a single divergence.  So how do we proceed?  Fortunately, we do not need to rely on the subjective superiority of one method over the other. Even if we accept Kirkpatrick's double divergence, it was nullified when the S&P 500 and the A-D line made successive higher highs again in September and again in October.  If the signal were valid, the A-D line would not have been able to make successive higher highs. 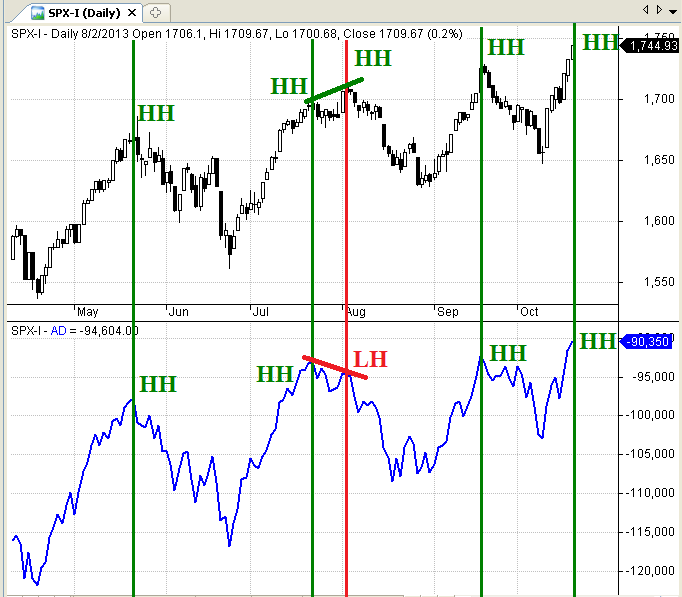 I recommend using market breadth statistics and plotting bearish divergences and double divergences in your investment process.  However, it is critical to use a broad definition of market breadth to enhance the reliability of the resulting forecasts.

In addition, when looking for double divergences, large gaps in time and price are more meaningful than small gaps. In other words, I would be hesitant to rely on a double divergence that occurred in a span of a few trading days.  Likewise, a lower high in the A-D line that was only down slightly from the previous high would also be suspect.  Notice that the double divergence in 2007 spanned several months and resulted in large declines in the A-D line, which generated a very powerful bearish signal.

The Trader Edge Asset Allocation Rotational (AAR) Strategy is a conservative, long-only, asset allocation strategy that rotates monthly among five large asset classes. The AAR strategy has generated 20%+ annual returns over the combined back and forward test period.  Please use the above link to learn more about the AAR strategy.

I have been an investment professional for over 30 years. I worked as a fixed income portfolio manager, personally managing over $13 billion in assets for institutional clients. I was also the President of a financial consulting and software development firm, developing artificial intelligence based forecasting and risk management systems for institutional investment managers. I am now a full-time proprietary trader in options, futures, stocks, and ETFs using both algorithmic and discretionary trading strategies. In addition to my professional investment experience, I designed and taught courses in financial derivatives for both MBA and undergraduate business programs on a part-time basis for a number of years. I have also written four books on options and derivative strategies.
View all posts by Brian Johnson →
This entry was posted in In-Depth Article, Market Breadth, Market Commentary, Market Timing, Technical Analysis and tagged Active Trader, advance decline line, cumulative advance-decline line, divergence, double divergence, market breadth, market timing, market top, technical analysis, trade, trader. Bookmark the permalink.

2 Responses to The Deadly Double Divergence