We all use economic, fundamental, and/or technical data to gain insight into market movements.  Some data may appear to lead the market, but there is often no plausible explanation for their supposed predictive abilities.  This can be disconcerting for a trader.  If we look at enough data over enough periods, some variables will appear to have explanatory power, but most do not hold up in actual trading.

However, the best tools come with a story.  In other words, there is a simple (yet, hypothetical) explanation why the variable should have some level of predictive ability.  These are my favorite types of indicators and they work well in practice, but they are hard to find.  I got the inspiration for a surprisingly effective causal indicator in a bonus 2012 Technical Analysis of Stocks & Commodities article titled "10 Signs That Tell You When To Stop Trading," by Matt Blackman CMT.

Friday Relative Performance: Cause and Effect

This is logically consistent.  On Monday through Thursday, market participants are only at risk (unable to exit their positions) from the market close at 4 pm ET to the market open the following day at 9:30 am ET.  This is only 17 and 1/2 hours.  If the traders have futures positions, the news is even better.  Electronic futures markets are open overnight as well, allowing the trader to exit positions at any time, eliminating much of the overnight gap risk during the week.

Unfortunately, Fridays are a different story.  After the equity market closes on Friday at 4 pm ET, market participants have to wait over 65 hours until the market opens again on Monday morning, almost four times as long as the overnight exposure during the week.  It gets worse; futures markets are closed from Friday evening until Sunday evening, making it impossible to exit or hedge positions for over 48 hours.

If traders were confident in the market, they would be willing to hold long positions over the weekend.  However, if they were apprehensive about the market, they would be more likely to exit their long positions on Friday, putting downward pressure on prices.  This is the rationale for developing a new indicator based on the price performance on Fridays relative to the rest of the week.

Ideally, an indicator should not be dependent on the price level or volatility of the individual security.  As a result, to eliminate the dependence on price level, I used relative rates of return (instead of relative price changes).  I then adjusted the relative returns based on the historical volatility of the relative returns to calculate the Friday Relative Performance Indicator (FRPI).  The resulting indicator values are directly comparable across all securities, which means that the indicator can be used to build systematic strategies and can also be used to rank groups of heterogeneous securities.

Here is a simplified version of the indicator formula, which is calculated over a user-specified look-back period:

We can use the FRPI as a market sentiment indicator.  When the FRPI reaches extreme levels, the current price trend has a tendency to pause or even reverse direction.

The best way to gain insight into a new indicator is to look at a chart.  However, it is never a good idea to base investment decisions on a single indicator.  As a result, in addition to the FRPI, I also included my custom commitment of traders (COT) indicator in each chart example below.  COT data is one of my favorite tools and one that I will discuss repeatedly in posts.  If you would like a refresher on analyzing COT data, please revisit my previous article "Trade With the Experts."

The chart in Figure 1 below is a daily chart of the continuous gold futures contract from October 2011 through the first week of April 2012.  The top panel contains a candlestick chart of the daily gold futures price.  The blue line in the second panel is my custom COT indicator.  The horizontal green and red lines in the second panel denote extreme bullish and bearish COT conditions, respectively.  The histogram in the third panel reflects the slope of the price trend; positive values (in green) imply increasing prices and negative values (in red) indicate decreasing prices.

The blue line in the last panel is the FRPI and the magenta line is a moving average of the FRPI.  The horizontal green and red lines signify extreme FRPI values.   Finally, to apply the FRPI correctly, we need to know when the FRPI is moving with price or diverging from price.  When price and the FRPI are both moving in the same direction, the histogram values in the bottom panel will be positive (green).  When FRPI is diverging from price (moving in the opposite direction), the histogram values will be negative (red).

Now let's look at a specific example of how to apply the FRPI.  In late February of 2012 (Point C), gold prices had been rising for two months.  This is evident in the candlestick chart and can be confirmed by the green (bullish) price trend histogram values in the third panel.

In the bottom panel, notice that the FRPI (blue line) has been declining steadily while prices have been rising.  Why were traders selling their gold positions on Fridays in a bull market? Because they were becoming increasingly uncomfortable with the elevated price of gold and were concerned that gold was overvalued. At Point C, the FRPI line finally reached the extreme level, which signaled a near-term price reversal.

Finally, the COT indicator in the second panel below was slightly below the red horizontal line ( at Point C), which means that commercials had become increasingly bearish and their positions had finally reached an extreme point - confirming an eventual pause or change in the bullish trend.

Prices had increased dramatically, speculators were long and overextended, commercials were very bearish, and traders were unwilling to hold their long positions over the weekend; something had to give.  Gold prices peaked the next day and dropped by 4.3% the following day.  Gold prices have been trending lower ever since. 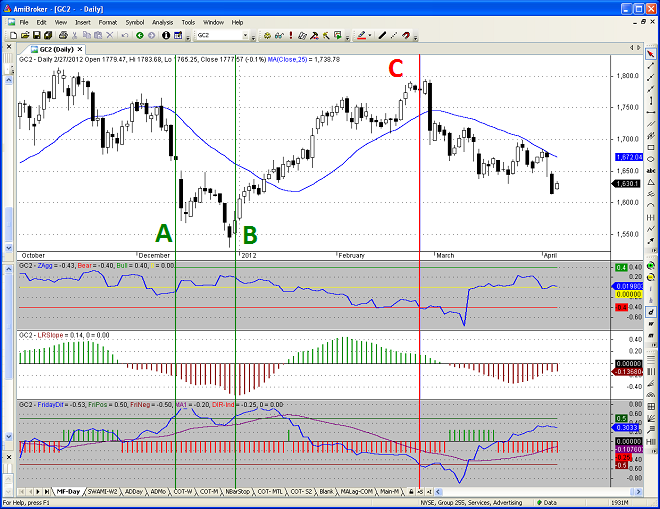 Points A and B above illustrate a similar reversal scenario, except the prevailing price trend was bearish.  The FRPI was rising (diverging from price) as traders were increasingly comfortable holding gold over the weekend at cheaper and cheaper prices.  Unfortunately, this time the COT indicator could not confirm the bullish FRPI signal at Point A or Point B.  The COT indicator did not reach an extreme level in December of 2011. The FRPI signal at Point A was premature, although it was followed by a brief rebound in prices.  Point B was a much better bullish signal, occurring only one day after the 5-month low in gold.

In the examples above, the FRPI diverged from price, signaling a potential price reversal.  We also need to investigate scenarios when the FRPI reaches extremes while moving with price.

Figure 2 below is a daily chart of the continuous Japanese Yen futures contract from January 2012 through the first week of April 2012. The panels are the same as in Figure 1: candlestick chart, COT indicator, price trend indicator, and FRPI (from top to bottom).

In my March 28, 2012 article "Trade With the Experts," I noted that the Japanese Yen contract had the highest (most extreme bullish) COT level of all futures contracts. The extraordinary COT level in the Yen is obvious from the height of the blue line above the extreme bullish threshold (in the second panel below).  Let's take a look at the FRPI indicator and see if it confirmed the bullish COT signal in the Yen.

In late March 2012 (Point A), the FRPI crossed below the lower extreme threshold (in the bottom panel), signifying a potential price reversal.  However, unlike the previous gold examples, the FRPI was moving in the same direction as the Yen futures price; they were both trending lower.  How do we interpret extreme FRPI values in this scenario?

In March (Point A below), the Yen was declining in value and speculators were already massively short and overextended; instead of becoming less comfortable holding their excessive short positions over the weekend, speculators were selling more and more Yen contracts every Friday, even at lower prices. As I mentioned above, the COT positions in the Yen were more extreme than any other futures contract. Commercial traders (who are value buyers with virtually unlimited capital), were willing to continue to buy additional Yen contracts at very attractive prices.   The downtrend was clearly unsustainable and Yen prices began to turn higher. 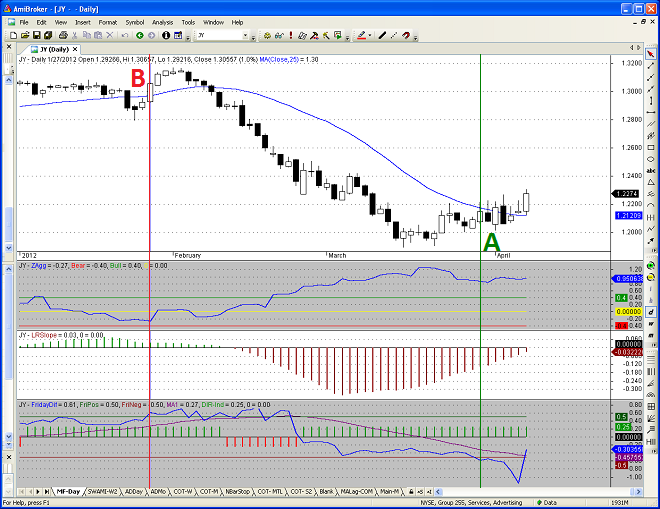 In late January of 2012 (Point B above), the opposite scenario occurred.  Yen prices had been rising, but had begun to consolidate.  The FRPI had also been rising and had just crossed the extreme threshold, suggesting that the uptrend was running out of steam.  The COT indicator was bearish, but had not crossed the extreme threshold, so the bearish FRPI signal was not confirmed.  Nevertheless, the Yen made one last minor push to the upside over the next week, then declined steadily for two straight months.

The FRPI in Practice

The FRPI is very simple conceptually and offers a new and objective way to measure market sentiment for any security or futures contract.  While no indicator is perfect, when used in conjunction with other tools, the FRPI could significantly improve your understanding of past and current market conditions and help you identify prospective market turning points.

To identify potential changes in the prevailing trend, use the following steps:

In practice, the FRPI could be used by trend followers as a signal to take profits.  It could also be used (with caution) to establish new contra-trend positions.  Since it is a standardized indicator that is independent of price level and volatility, it could be used to develop rule-based or systematic strategies, either as a signal generator, or as an incremental filter for an existing strategy.   Finally, it could also be used to scan all futures markets or a custom working list to identify the candidates with the most extreme FRPI values.

I had heard about the day of the week effect, but never would have developed the FRPI if I had not read the recent article in Technical Analysis of Stocks & Commodities magazine.  I programmed and evaluated the FRPI using AmiBroker software, a powerful research platform for testing and developing custom strategies and indicators.  This illustrates the importance of constantly looking for new trading ideas and insights and having the required tools to integrate them into your investment process

I have been an investment professional for over 30 years. I worked as a fixed income portfolio manager, personally managing over $13 billion in assets for institutional clients. I was also the President of a financial consulting and software development firm, developing artificial intelligence based forecasting and risk management systems for institutional investment managers. I am now a full-time proprietary trader in options, futures, stocks, and ETFs using both algorithmic and discretionary trading strategies. In addition to my professional investment experience, I designed and taught courses in financial derivatives for both MBA and undergraduate business programs on a part-time basis for a number of years. I have also written four books on options and derivative strategies.
View all posts by Brian Johnson →
This entry was posted in COT Analysis, Futures, In-Depth Article, Market Commentary, Market Timing, Seasonal Tools, Technical Analysis and tagged candlestick charts, commitment of traders, COT report, day of the week effect, futures, market timing, seasonal analysis. Bookmark the permalink.

One Response to Everybody Loves Fridays